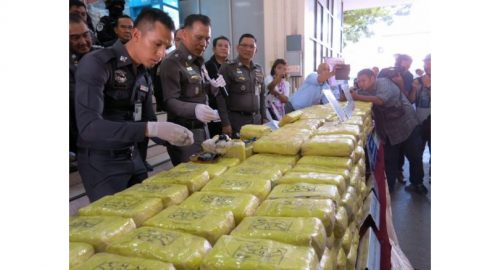 He told a press conference in Bangkok that officers had so far this fiscal year confiscated 100 million yaba pills and more than 4,000 kilograms of “ice” worth Bt7.6 billion.

Chalermkiat said Narcotics Suppression Bureau (NSB) officers had arrested five Hmong suspects in Chiang Rai on Saturday while they were allegedly transporting 6,392,000 yaba pills from Chiang Rai to Ayutthaya in a 10-wheel truck.

In another case, NSB officers on Monday morning arrested four suspects at a checkpoint on Phetchkasem Higheway in Chumphon’s Tha Sae district while they were transport 10 kilograms of “ice” and 200,000 yaba pills from Chiang Mai to a customer in Songkhla’s Hat Yai district.

The suspects reportedly told police they were hired for Bt1 million to transport drugs.

In a third case, police arrested Charles Ndubuisi Umemma, a 34-year-old Nigerian national, who was wanted on a court-ordered arrest warrant. Umemma, who was apprehended in Bangkok’s Bang Kapi district on Saturday, faces charges of obtaining and possessing “ice” with intent to sell and send to Australia. Police had found that he tried to send 120 grams of “ice” to Sydney.