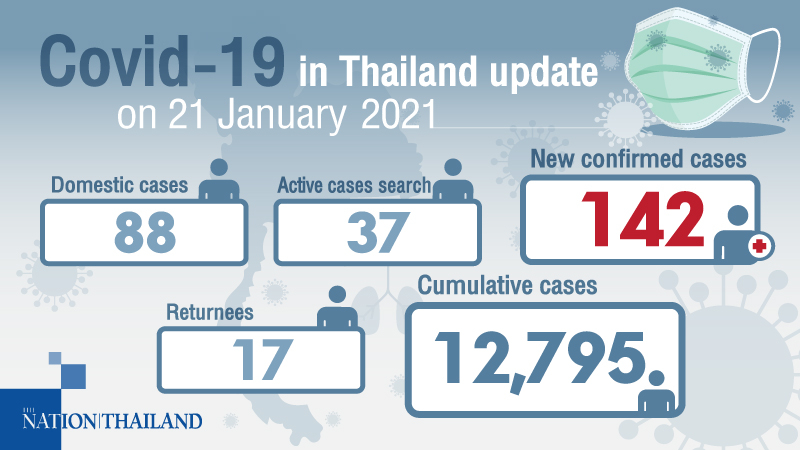 The Centre for Covid-19 Situation Administration (CCSA) on Thursday reported 142 new cases over 24 hours, including 17 who flew in from abroad.

Of the new cases, 88 had been exposed to the virus while visiting high-risk areas. Samut Sakhon had the highest number of infections, with 63, followed by Bangkok with 14.

Proactive testing led to the discovery of 37 cases, mostly in Samut Sakhon, where 26 foreigners and three Thais tested positive.

Of the returnees, 11 are Thai nationals, two from Myanmar, one from Sweden, three from Turkey, one from India, three from the United States, and one from Malaysia.

Also testing positive were a Vietnamese woman and Cambodian man who travelled from Malaysia, a Swiss man, a Japanese man and two Indian men, who flew in from their respective nations.

Meanwhile, 221 patients have recovered and been discharged.

As of Thursday, the number of confirmed cases in Thailand had risen to 12,795 – 10,468 of whom had contracted the virus locally, including 4,167 who were found positive via proactive testing, while 2,327 were returnees. So far, 9,842 have recovered and been discharged, 2,882 patients are still in hospital and the death toll remains unchanged at 71.

Thailand ranks 128th on the global list of most cases. The US tops the list with 25 million, followed by India 10.61 million, Brazil 8.63 million, Russia 3.63 million and the United Kingdom 3.5 million.

CCSA spokesman Taweesin Visanuyothin, meanwhile, reported the case of a woman in Nakhon Phanom who was infected by a relative with possible links to the Rayong gambling den cluster. Many high-risk contacts linked to this cluster have tested negative, though some 1,000 are being isolated.