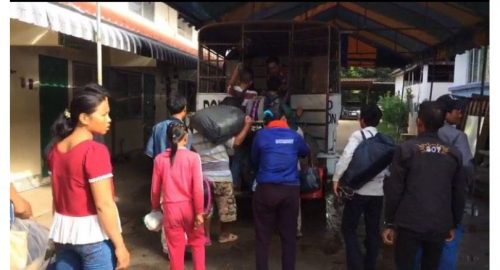 Immigration police in the border province of Sa Kaew on Sunday detained and deported a group of 250 Cambodians whose employers terminated their work out of fear of heavy punishment from the newly implemented labour decree.

The workers were found at the Aranyaprathet train station and detained after they could not present travel documents.

They confessed to immigration officials that they had boarded a train from Bangkok to Sa Kaew as they wanted to return to their home country.

Their employers urged them to return home and to apply for passports before they could recruit the workers back to work. Without passports, employers would not hire them again.

The new decree is aimed at managing foreign workers and involves severe punishment for employers who hire undocumented workers.

Officials registered the Cambodians and took their photos before deporting them at the border checkpoint.