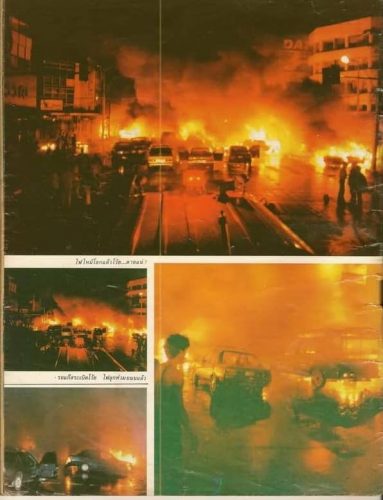 It was one of the most unbelievable accidents in modern Thai history. It was September 24th 1990 at about 10pm when a gas tanker overturned on Petchaburi Road in Bangkok.

The driver had been going fast trying to beat the red light after exiting the expressway.

In an instant 20,000 litres of Liquid Petroleum Gas started spewing onto the roadway and two tanks exploded.

Some 67 cars and motorcycles waiting at the lights were caught up in the fireball.

Many drivers and riders died instantly while still in and on their vehicles. Others were pictured still alive  as they staggered about with the clothes burnt from their bodies.

Some were just left wearing their shoes and belts. These “walking ghosts” as they were called, were soon to succumb to their dreadful injuries.

In total 80 people were killed on that fateful night including the driver of the tanker Suthan Fakkhaelek who died in his cab.

A court decided the gas tanker was not up to standards resulting in the explosion.

Most Bangkokians can remember where they were on that night – many had stories of having passed through that area just moments before.

Much of the aftermath was filmed by a TV station that had its offices nearby. The tragedy spawned other features and documentaries.

For well over a year after the burnt out cars were seen rusting on the road by the Makkasan Railway yard as a poignant reminder of those who had so tragically lost their lives in the disaster.

The remembrance of the event was reported by Khao Chao Baan on Facebook.

Extra observations and information are from Thaivisa’s own reporter.