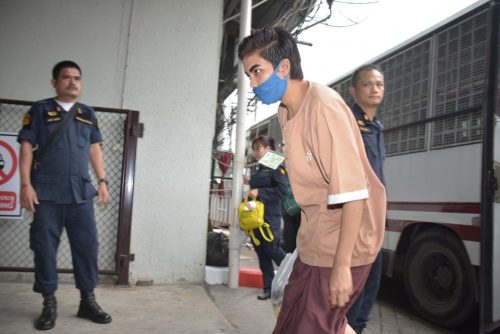 Pasist Arinchayalapis on Wednesday at the Criminal Court in Bangkok.

The mastermind of a tour scam that left thousands of holidaymakers bound for Japan stranded at an airport last year was sentenced to more than 4,000 years in prison Wednesday.

The Criminal Court sentenced Pasist Arinchayalapis, or Sinsae Shogun, to 4,355 years in prison for 871 counts of indictment carrying a five-year jail term each, after his company scammed thousands of tourists last year.

He was convicted of fraud and violating the Computer Crime Act.

However, according to the law, Pasist will serve 20 years in prison and pay a 20,000 baht fine. His multi-level marketing firm Wealth Ever was fined 435 million baht.

The court also ordered that Pasist, Tatdao, Parinthorn and Wealth Ever company repay the 871 victims with a yearly interest of 7.5 percent starting July 6, 2017 – the date the victims filed the police complaints.

The con job led by Pasist came to light on April 11, 2017, when more than 1,000 holidaymakers expected to fly to Japan’s Osaka prefecture were left stranded at Suvarnabhumi Airport. Each of them paid roughly 10,000 baht for the tour.