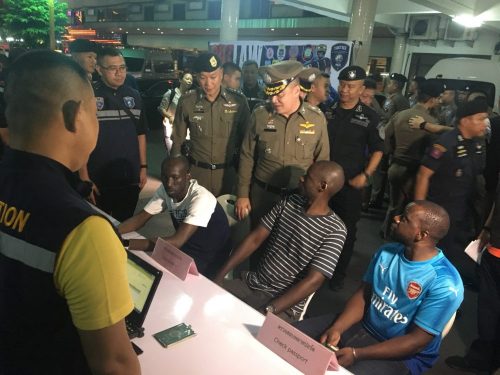 More than 500 foreigners were arrested in another nationwide raid, police said Friday.

A crackdown on illegal immigrants seemed to gain intensity as the latest arrests almost doubled last week’s record numbers. A total of 528 foreigners were rounded up yesterday from 307 locations countrywide including Bangkok’s Nana and Sampeng areas, according to deputy immigration chief Maj. Gen. Itthipol Itthisarnronchai.

He said 114 were arrested for overstaying their visas, 172 for illegally entering the country and the rest for petty crimes. The majority of them are Indians and Pakistanis, with some Guineans and Malians, he added.

On Thursday, 40 Indians were captured from Sampeng market in Chinatown. Itthipol said 30 foreigners were arrested from Nana area.

The sweeping campaign has seen 2,801 foreigners arrested and banned from entering Thailand, according to Itthipol.