Accidents And Fatalities Up On Last Year Already

With the New Year traffic rush in full swing, police report a sharp rise in accidents and fatalities on the first day of the holidays. 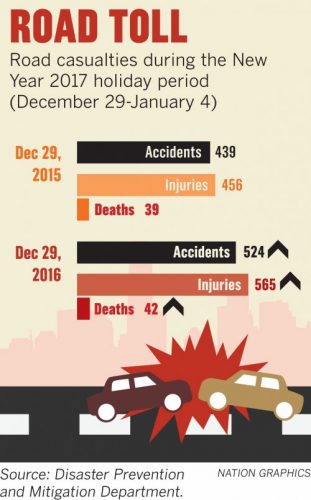 The main causes of accidents were drunk driving and speeding.

Chiang Mai reported the most accidents at 21; Pathum Thani suffered the most fatalities with four deaths, and Udon Thani and Phitsanulok had most casualties with 23 each.

The authorities on Thursday prosecuted 500 violators of the holiday drink-driving ban. 21 motorcycles and six cars were impounded, while driver’s licences from 62 motorcyclists and 25 personal car/public transport drivers were seized.

Yesterday, roads were crammed throughout the country as motorists continued to make their way to home cities, towns and villages.