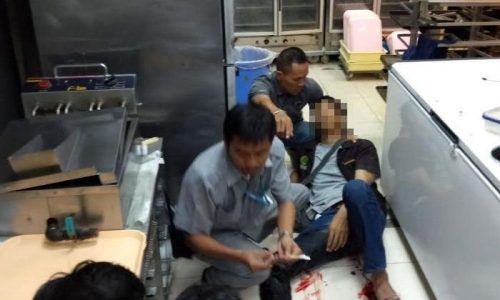 Father warns man then shoots him

A Thai father who had repeatedly warned a man to stay away from his daughter shot at him then fired into his pick-up in the parking lot of Tesco Lotus in Nakorn Pathom yesterday.

Police captain Wasan Tangtham found a lot of blood in a bakery at Lotus where U-Then had fled following the shooting.

The victim was hit in the leg and was rushed to a local hospital after suffering severe blood loss.

Outside in the parking lot waiting for the cops was 71 year old Suchart with a .22 gun. He was with his wife and family in a Toyota in parking area 8C.

U-Then then went on Facebook to allegedly insult the father making him more cross.

Suchart was out with his family shopping at Lotus when U-Then came up to his car and banged on it.

This set Suchart off and he shot at U-Then before firing four shots into his pick-up.

Suchart has been detained and charges are being decided.

The Nakorn Pathom court has granted bail to the father who shot a 23 year old Kasetsat University man in the parking lot of Tesco Lotus.

Suchart Buasaengian had grown tired of Uthep Samngamnoi’s constant advances to his daughter. She also didn’t want to have anything to do with him.

When the pair met by chance in the car park of the store in Nakorn Pathom, Uthep showed Suchart his middle finger and thumped on his car.

Enraged Suchart produced a .22 gun and shot Uthep in the right leg. He fled to a bakery and then Suchart shot four times at his pick-up.

He waited to be arrested and Pol Capt Wasan Tangtham charged him with attempted murder and weapons offences.

Police opposed bail at a first appearance in court on the grounds that the incident was serious, the defendant might flee and could be involved in witness tampering.

The court rejected this and granted bail much to the joy of family members.

Uthep is a student at the Kamphaeng Saen campus of Kasetsat university.