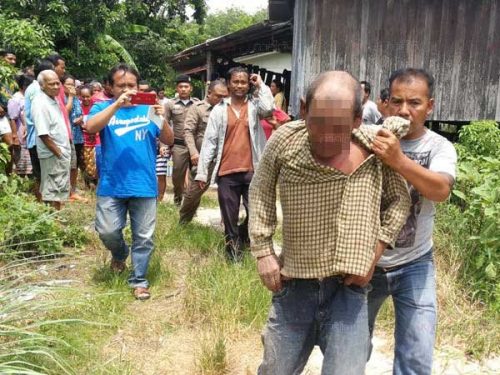 Mob deal out their own justice. (Photo:-Manager)

Local officials swung into action putting out a distress call over the loudspeakers and a hundred people were mobilized. The mob first confronted the three other workers who denied there was another person in their work gang.

When a neighbour said there were really four of them the mob were enraged by their duplicity and attacked them mercilessly as the hunt for the fourth man was stepped up.

He was found cowering in some undergrowth and was then set upon by men punching him and kicking him before the police arrived.

When the cops got to him he had lost control and urinated on himself.

He was charged with attempted rape and trespass.

The other three men were found to be innocent.

Relatives said that the autistic girl told them that Phairot had tried to rape her on a visit to the village before.

Times comment:- Whilst no-one should take the law into their own hands, it’s difficult not to have sympathy for the villagers in this instance.