Another Happy Away Day For Buriram At Bangkok United 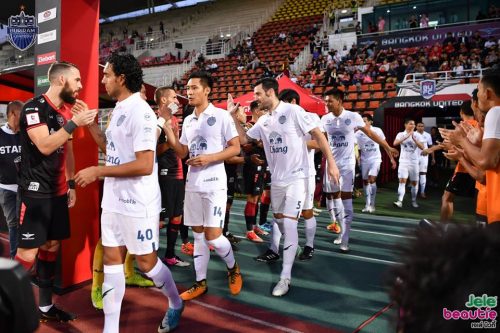 Bangkok United sportingly congratulate the new champions as they came onto the pitch.

Buriram’s winning run continued on Sunday with a convincing 3-1 victory at Bangkok United. The home side were still hopeful of securing the runners-up spot and thus qualify for the Champions League.

However, with defeat by Buriram and Muang Thong’s narrow win at Chiang Rai , their hopes were dashed.

The first-half was fairly even with Coelho wasting the two best chances, leaving the game goalless at the interval.

However, the second period saw Buriram take the lead in the 49th minute when Diogo moved into the box only to have his heels clipped from behind and there were few complaints from the United players when the referee pointed to the spot.

Diogo took the kick himself and found the net with a firm, low shot right in the left-hand corner. Eight minutes later Buriram increased their lead.

A right-wing corner was headed on by Coelho for Pansa to thump a firm header against the underside of the bar and the ball bounced down well over the line.

Bangkok United replied four minutes later with a fine goal from Mario. A right-wing corner reached him in the left-corner of the box and he turned inside before placing a perfect shot into the far-corner, leaving Siwarak with no chance. 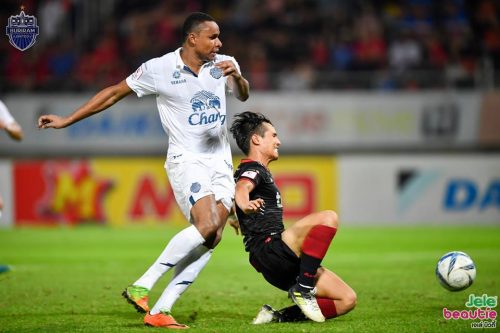 So it was game on but Buriram restored their two-goal advantage with an absolutely stunning goal by Coelho in the 78th minute. He latched onto a through ball and though he was under pressure from two defenders, he clipped a superb shot up and over the keeper into the corner of the net.

It really was a finish of the highest quality and if you’ve not seen it, get onto You Tube !

Buriram have now gone 19 games unbeaten and have won their last 9 games. They hope to make it 10 at Chonburi on Saturday, November 18, 6pm.