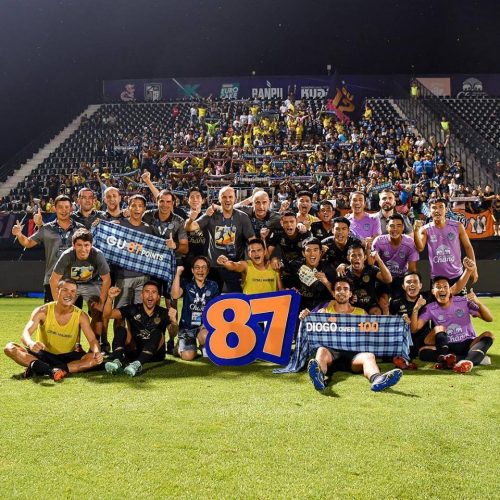 New record set for the second year in succession

This makes great reading but it does pose serious questions as to the true quality of the Thai league. However, you can only beat what is put in front of you and Buriram have done exactly that. This last game saw Buriram squander early chances before Patino made the most of a lucky rebound to score emphatically.

Ratchaburi created a number of headed chances but failed to put them away and indeed could have scored twice in first-half stoppage time. The absence of Tunez was an obvious reason for this, his organization of the defence is pivotal in Buriram’s success.

A detailed look at the season will appear in a couple of weeks. There was high drama at the other end of the table when the final relegation place was decided deep into stoppage time.
Bangkok Glass had lost 2-1 at home to Nakhon Ratchasima but were still a point ahead of Chainat who were drawing 1-1 at Suphanburi after the home side equalized in the 91st minute. However, Chainat scored again in the 95th minute to send Bangkok Glass down on the head-to-head rule. High drama indeed.