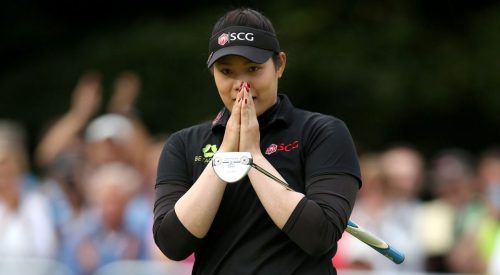 Ariya number 1 in the world rankings.

Ariya Jutanugarn has become the No.1 women’s golfer in the world without even having to pick up a club this weekend.

Ariya won elevation to No.1 Saturday (early Sunday Thailand time) when the only other woman who could beat her, Korean Ryu So-Yeon missed the cut on Saturday at the LPGA ShopRite Classic to confirm the shift in rankings.

Ryu, ranked third in the world, could have leapfrogged Ariya by finishing third or better in the tournament at Galloway, New Jersey, near New York.

But she failed even to qualify. She fired back-to-back rounds of three-over 74 to miss the second-round cut in the 54-hole tournament, where South Korea’s Kim In-Kyung and American Paula Creamer shared the 36-hole lead.

Ko has fallen into a slump this year, winning no tournaments and rarely finishing in the top 10.

Ariya becomes the first Thai and 10th player to reach Number One since the women’s rankings were introduced in 2006.

Mexican Ochoa holds the record for the longest stint as world number one at 158 weeks.