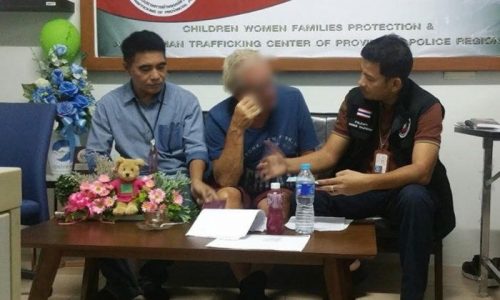 The Netherlands man arrested in Jomtien on Sunday for abusing little boys has told Chonburi cops that he bribed a border official.

The immigration chief in Surin has promised a full investigation.

Rennard, 69, was on a one year blacklist but managed to get into the country through the Chong Jorm border checkpoint in Surin.

Police are saying he is a key player in a child sex ring.

Chief of Surin immigration Pol Col Charnchai Chaokasem spoke to a reporter over the phone later and defended the crossing saying that it implemented strict measures that resulted in 56 people on warrants being stopped last year and 27 already in 2018.

He said that there was no record of Joseph Marie Rienards entering Thailand in Surin. But he admitted that he had tried to pass the crossing in May 2017 but was turned back as he was blacklisted. He had clearly been in Cambodia.

Asked about the possibility that people could enter Thailand along the porous 100 kilometre border through a natural crossing point he said that this was possible. Though cooperation between immigration, the military and pho yai baan had meant that this eventuality was unlikely now.

He said that immigration was determined to root out corruption in its ranks.

The abuser’s claims about paying 3,000 baht to an official would be vigorously investigated and if wrong doing was found the person or persons responsible would face internal sanctions and criminal prosecution.

Surin immigration and Chonburi police are cooperating closely in the matter.