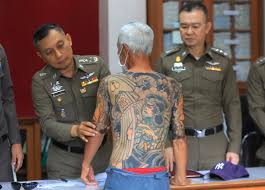 Police have discovered that the old Yakuza gangster arrested yesterday in Lopburi after being in Thailand for 13 years has a Thai wife and was regularly receiving money from Japan.

Shigeharu Shirai, now said to be 72 by Sanook, is wanted in Japan over the death in 2003 of a gang rival in Takasucho district of Tsu City.

Shirai has admitted to being in charge of a division of the Yamaguch Gumi one of the biggest divisions of the Yakuza with 200,000 plus members. He was involved in illegal gambling operations.

According to reports he had received funds two or three times a year from a Japanese friend.

Police are trying to find out who that person is as well as see if Shirai has committed any crimes in Thailand before they extradite him to Japan.

Wikipedia says that the Sixth Yamaguchi-gumi is Japan’s largest Yakuza organization. It is named after its founder Harukichi Yamaguchi. Its origins can be traced back to a loose labor union for dockworkers in Kobe before World War II. It is one of the largest criminal organizations in the world.