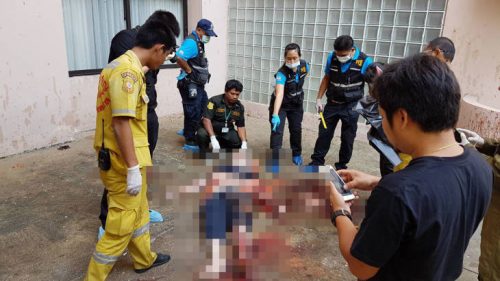 An Australian man jumped to his death from the eighteenth floor of  a Bangkok hotel.

Adrian John Finn was found on a second floor balcony area around 8am by a guest in a nearby room who alerted hotel staff. The guest said he had heard a thump of something falling in the early hours but didn’t think anything of it at the time.

The dead man was clothed, without shoes and  wearing eye shades used for sleeping in.

Police checked his room on the 18th floor and found no signs of a struggle or anything out of place. On a table was a note to the dead man’s elder brother Steven Finn detailing what to do after his death.

The badly broken body was sent for an autopsy. Police are in contact with the Australian embassy and are contacting the elder brother to help with their inquiries.

The hotel which was not named is in Soi Sathorn 1.

Any death is sad but a suicide is particularly tragic. It is often dubbed “a coward’s way out” but that is far too simplistic. I would say it takes a lot of courage to take your own life. It is particularly distressing for those left behind who often feel guilt for not seeing the signs that the person concerned was contemplating suicide.

However, more often than not there would not be any signs. Feelings of hopelessness are bottled up inside to the point where ending their life appears to be the only option. There would be no “logical” thoughts regarding those left behind apart from an explanatory note of regret.

Sadly, I have been touched by suicide on two occasions and we should only feel pity for the tortured souls who felt that their only option was to end their lives.