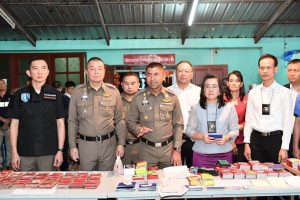 Visa agents in Laksi in Bangkok have been busted by immigration after they circumvented immigration by issuing fake visas and 90-day stamps.

The immigration site on Facebook said that their leader Lt-Gen Surachate Hakparn personally led a raid on CBS World Co Ltd, a company that arranged for migrant workers to come to Thailand.

They appeared to be catering to people from Myanmar.

Taken into evidence were 489 passports and 29 counterfeit stamps.

The immigration site said that the pair had admitted running the business for 10 years and charging 1,500 to 2000 baht a time for the fake stamps.

They said that a member of the public had alerted them to the fake stamps.

INN reported that the arrests came after contact was made to immigration offices in Prajuab Khiri Khan and Nakorn Sawan where there were irregularities discovered in 90-day reporting stamps.