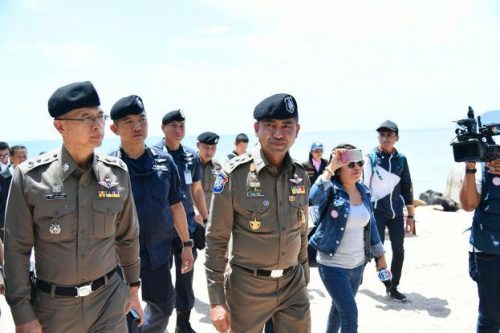 Big Joke looking for the truth about Koh Tao allegations

The deputy commissioner of the Thai Tourist Police has revealed that he is set to fly to England to interview the 19 year old who claims she was raped on the controversial island of Koh Tao.

Maj-Gen Surachate Hakpan – known in the Thai media as Big Joke – has said that he has made representations to the British Embassy and will go to England soon.

The alleged victim – understood to be Isabel Baxter or Issy from South London – has spoken to three UK newspapers alleging she was drugged and raped in June. She claims police refused to take her report on Koh Pangan only reporting a theft.

The British Embassy in Bangkok are concerned about the motives of the teen after she went to the media but did not contact them.

Where a meeting will take place is yet to be decided as the Thai police work in conjunction with the embassy.

It is understood that the metropolitan police in London are involved in the case though there has been no contact regarding DNA allegedly on a t-shirt.

Maj-Gen Surachate, who found no evidence of a rape having occurred on a recent trip to the island in Surat Thani province, reiterated that should the accusations prove to be false,the Thai authorities would seek the prosecution of the teen.

He again said that the administrators of the online group “CSI LA” and The Samui Times are to be prosecuted but that more time is needed to finalize matters.

Times comment:- This is a welcome move and hopefully the truth will emerge. There are a number of issues which cast doubt on the allegations. However, if this young woman was indeed raped then she is entitled to justice.