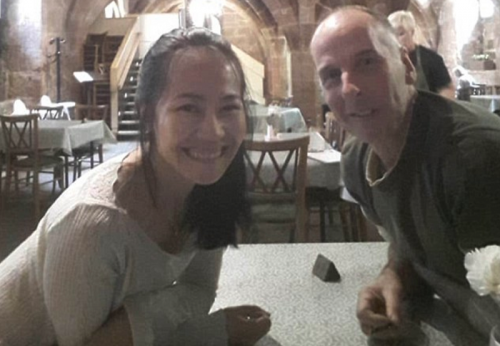 One of the hero British divers who found the twelve boys and their football coach trapped in the Tham Luang cave in Chiang Rai has found love with a Thai nurse.

Rick Stanton, 57, has been dating a Thai woman named Siripon Bugnngern, known as Amp, after meeting her while she was on holiday in England earlier this year.

Coincidentally, Amp is also from Chiang Rai and was able to act as a volunteer translator to the British diver and other members involved in the rescue mission at Tham Luang cave.

An unnamed source said “Although it’s early days and they haven’t been together for long, Rick is absolutely besotted with Amp.

“She is from Chiang Rai so when Rick was asked to come and help rescue the missing boys Amp was right by his side.

She has been helping Rick and the other divers throughout the rescue operation. Amp is part of the team, helping translate between the British and Thai rescuers.

They are very close. I wouldn’t be surprised if they get married.”

A friend also told the news site: “Amp’s home town is Chiang Rai, but she met Rick while she was on holiday from her nursing job in Australia.

“She came back to Chiang Rai just a few days before Rick was called to help in the rescue operation by chance.

“She took part in the rescue mission and stayed with the team of divers during the operation.”

The pair are said to share a passion for outdoor pursuits.

Rick Stanton, along with fellow diver John Volanthen, were the first two divers to find the missing boys and their football coach inside the cave.

Incredible footage caught the moment Mr Stanton discovered the group, who at the time had been trapped inside the flooded cave for nine days with little food and water.

On Friday Mr Stanton, Mr Volanthen and other British divers who took part in the rescue mission returned to the UK.

As they left, Thai officials revealed the divers would each be given a Thailand Elite Card worth 500,000 baht that allows them to stay in Thailand for 5 years plus other benefits.

In an interview with the BBC, Mr Volanthen played down the praise he and the other foreign divers had received both in Thailand and around the world.

“We’re not heroes,” Mr Volanthen said after arriving back in London.

“What we do is very calculating. It’s very calm, it’s quite the opposite … But it’s really the international team I would like to focus on and the Thai SEALs.”