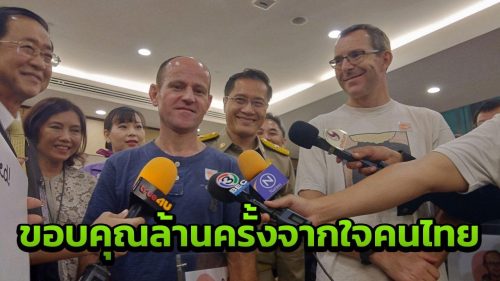 Two British cave diving experts key in the operation to save the Mu Pa boys at Tham Luang were given a good send off at Suvarnabhumi airport last night.

And they left with some good British humor that got the crowd laughing.

Asked what message they had for the boys Jason Mallison said with a cheeky grin:

While his compatriot John Volanthen chipped in with: “Don’t go in caves when it’s raining!”

The mood was a happy one as tourism and sports minister Weerasak Kowsurat and communications minister Arkhom Termphitayaphaisit turned up with a host of other officials to say thanks on behalf of the Thai people.

Mr Volanthan and Mr Mallinson – both members of the British Cave Rescue Council – praised the Thais and the international effort before heading to London on TG 910 just after midnight.