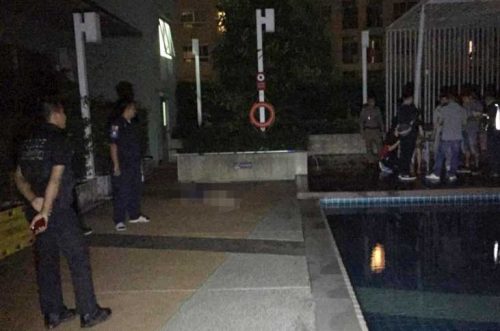 A British man who was found dead in Pattaya earlier this week killed himself after racking up huge debts financing the lifestyle of his ex wife.

John Toms, 68, from Wales, had thrown himself from his 18th floor balcony at Lumpini Ville condo in Naklua at 1am on Wednesday.

Mr Toms had burned through his life savings and was in £50k debt after showering his ex wife with gifts.

Mr Toms who according to reports had divorced or was just about to divorce Thanyaporn Donsakul who he married one month after meeting her in a bar in Pattaya in 2012.

He was forced to sell his belongings in order to give his wife payments each month.

He later worked in Thailand as an English teacher in order to try and earn extra money after buying his ex wife a car, a business and furnishing her home in Khon Kaen.

A report  claims Mr Toms, who received a pension of £1,136 per month,  eventually had to borrow money off friends, having blown his life savings . He was then forced to live in a cramped room in Pattaya having amassed debts of 50k.

With divorce from his ex-wife imminent Mr Toms was worried that “corrupt judges” in Khon Kaen would conspire against him and leave him with nothing.

Mr Toms had since met another Thai woman named Naritha Daosri, who found his body on Wednesday morning.

Naritha, who runs a coffee shop in Pattaya and owns her own house, said that she supported Mr Toms as he had no money.

It is thought that Thanyaporn had since moved to Norway having started a relationship with a Norwegian man.

Times comment:- It is always tragic when someone thinks the only way out of a desperate situation is to take their own life. But when oh when are some men going to stop being so stupid? There are some wonderful girls here who are 100% genuine but you have to take time to find out.

One month is ridiculous. The most important thing is to live within your means and if that is not good enough for “the love of your life”, then dump her very quickly. She is only interested in what she can get.

Still, it’s a sad story and it is certain the young lady concerned will be anything but !

The charity Samaritans is available around the clock for people who want to talk.