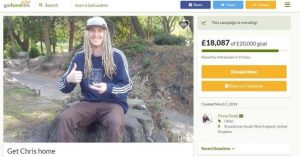 A man from Broadstone who was imprisoned in Thailand has been released on bail after he was arrested in connection with the theft of a mobile phone.

Former Poole Grammar School student Chris Dodd had been travelling across Asia but was jailed while awaiting for his case to be heard after Thai authorities are believed to have accused him of theft.

His mum Fiona Dodd set up a fundraising page on crowdfunding platform GoFundMe on March 1 calling for members of the public to help raise £20,000 in a bid to bring Chris home. So far just over £18,000 has been raised through donations.

Thousands raised for ex Poole Grammar School student locked up in Thai prison
Chris’ father travelled to Chiang Mai and the case was due to go before a judge for a bail hearing on Monday.

In a Facebook post on Monday, Mike Dodd said Chris has been released on bail and posted pictures of himself with Chris and Fiona.

He said: “He slept in a bed last night, had a cooked breakfast and is catching up with his family on FaceTime. Chris is totally blown away with all the support he has been given from his friends and family and no doubt will post something soon. Just some adjusting to do and taking it all in.

He added: “He was allowed to bring out some of his prison drawings. Next step is he is expected back in court on 25th March to see if the authorities are ready to present his case but this can take up to 84 days. His lawyers are trying to work towards a quicker solution to try and drop the case.