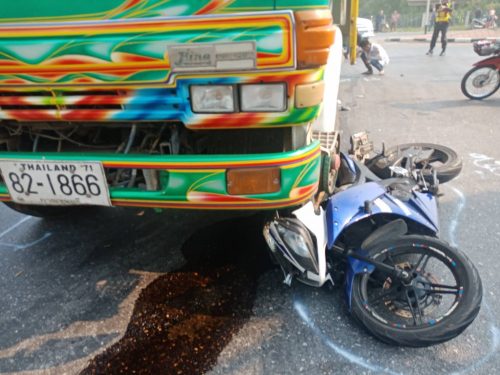 British tourists have been warned against hiring motorcycles and quad bikes in Thailand and other destinations popular with holidaymakers.

The warning comes following a spate of accidents involving Brits on motorcycles or quad bikes which resulted in death or serious industry.

Some of accidents highlighted by ABTA involved British nationals in Thailand, where a motorcycle can be hired to inexperienced riders for as little as a few hundred baht per day.

In March, Phillip Loates, 26, from Essex was killed when the motorcycle he was riding collided with a lorry in Chiang Mai.

Also in March, Brit Harry Cross suffered life changing injuries when he collided with a sugar cane truck in Kanchanaburi.

Uninsured Mr Cross had been riding his Yamaha motorcycle to Kanchanaburi immigration office when he collided with the truck.

Mr Cross, who was wearing a helmet and safety gear, suffered catastrophic injuries, including his right leg being degloved, after being dragged by the truck for more than 15 metres.

Mr Cross, 29 from London, was rushed to hospital where doctors discovered he had also suffered a shattered pelvis, multiple breaks to his leg and three broken ribs, in addition to the degloved leg.

Due to the severity of his injuries, Mr Cross was rushed into surgery but doctors were unable to save his leg and it had to be amputated above the knee.

A third accident in March last year, this time in Hua Hin, resulted in Brit Mark Haley, 56, being placed in an induced coma after suffering fractures to his spine and pelvis, as well as broken ribs and a collapsed right lung after he was hit from behind by a car at the u-turn on Phetkasem Road opposite the entrance to Palm Hills.

In May, a pregnant British woman was killed while riding a motorcycle in Phuket.

Nikki White, ABTA’s director of destinations and sustainability, said: “Every year people suffer serious injuries after hiring mopeds or quad bikes while on holiday. Many have little experience of using these vehicles and are also unfamiliar with the local roads and driving standards.

It’s so easy when you’re relaxing on holiday to do things you wouldn’t dream of doing back home; but you are putting yourself at risk of serious injury if you hire these vehicles, and on top of that, many travel insurance policies won’t cover such activities.”

ABTA’s advice to Brits in Thailand is that anyone with limited experience should think twice before hiring a motorcycle and quad bikes should only be used in supervised off road conditions. It added that many standard travel insurance policies do not cover accidents involving quad bikes.

Data released by the Foreign and Commonwealth Office last year revealed that road traffic accidents involving motorcycles were one of the biggest causes of death of Brits in Thailand.