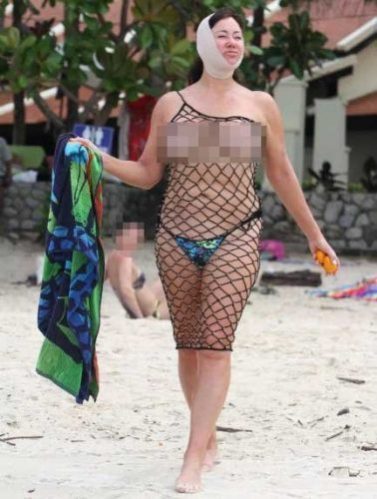 Never-shy Big Brother star Lisa Appleton went topless on the beach in Thailand after being rushed to hospital with an exploded abscess in her mouth.

The 50-year-old flashed her boobs and tried to juggle satsumas on the sand outside her luxury hotel in Patong, where she has been recovering from face and eyelid surgery.

Lisa, who has made a name for herself since Big Brother with a string of outrageous stunts, paraded around in bizarre fishnet beachwear near the Impiana Hotel.

Carrying a lurid beach towel in one hand and a trio of satsumas in the other, the star strolled about the seafront wearing just bikini bottoms and a string dress.