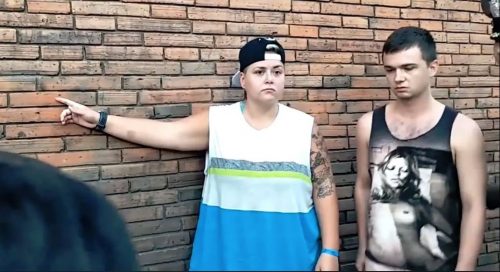 A British man who was arrested earlier this week for vandalising the 800 year old Tha Phae gate in Chiang Mai says he has “been an idiot”.

Lee Furlong, 23, was caught on CCTV spraying ‘Scousse Lee’ onto the historic wall at 4am on Thursday morning.

The young man from Liverpool, who even managed to spell the word ‘Scouse’ incorrectly, says he was “really, really drunk” when he picked up the spray can and has apologised to the Thai people for his actions.

Lee said:  “I’d been drinking all day. I’d had some bad news from my family and I went out drinking. I mean, I was really, really drunk.

I saw the spray can and just picked it up. Honestly, I didn’t know what I was doing. When I woke up the police were here.

They took me to the station and I was in shock. I’m terrified of what will happen now.

I’ve spoken to my family and I’m trying to get some help. I really need it. I honestly don’t know what to do. My visa runs out in two days, that’s another problem.

I had been having such an amazing time here. The best time of my life. I’m just devastated that I’ve done something so stupid. I’m sorry to all the Thai people that have been offended by it. I’ve been an idiot.”

Lee said that police have taken his passport and that his trial is due in two weeks.

“We feel absolutely devastated, mortified and so scared – because my kid is in prison in Thailand, and all the horror stories that go along with that.

I am so embarrassed and ashamed. I cannot even begin to describe how our family has been affected by his actions.

He is prone to making ill judgements – he has a lot of tumours in the frontal and temporal lobes of his brain and suffers with epilepsy as a result of it.

Mrs Furlong said Lee’s actions were due to him recently being told that his grandmother is seriously back in the UK.

Mrs Furlong explained how she received a call saying he would need to find approximately 150,000 baht so Lee could be freed on bail.

“My husband is an ill man and unable to work, and I work in a sweet shop.

We live hand-to-mouth with what’s going on in this country with this government – we live hand-to-mouth, we live week-to-week and it is only through the goodwill of other people that we have even been able to glean this bail money together.

He was due to fly home on Sunday and I felt like I could finally breathe out, because he only had five days left and then he would home safe.”

Lee and friend Brittney Schneider, 23 from Canada, were arrested on Thursday for spray painting graffiti on the Tha Phae gate.

Speaking to CTV News, Brittney’s mother Tara Schneider said her daughter was “very afraid” and that it was “very out of character for her. She’s never been in trouble in her life.”

Col. Teerasak Sriprasert, chief of the Chiang Mai police, said that Lee admitted that he wrote “Scousse Lee” on the 800-year old wall, while Schneider told police that she wrote the letter “B” underneath it.