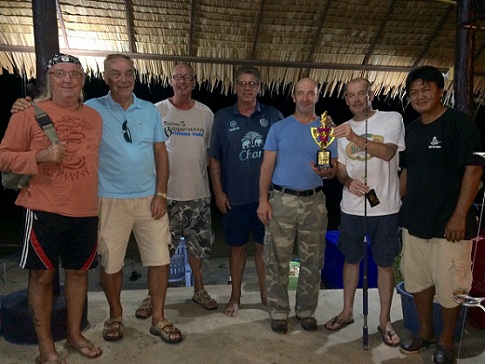 The anglers and Mr Winyoo after the competition.

Buriram Angling Club had its first competition on Friday 11th November 2016 at the Buriram Monster Fishing Park. The competition started at 16.30  and the 7 competitors fished until 22.00.

As usual Mr Win was there to warmly greet us and make sure that everybody was well tackled and baited. The trophy was to be decided by whoever caught the most fish and there was also a rod to be won by the person who caught the last species.

The fishing was slow despite the best efforts of Mr Win .However I got the show on the road with 2 red tail catfish caught just after dark.

There was then a long period of inactivity until John Kitchen landed a chaopaya catfish and a beautiful emerald catfish. Alan also caught a redtail and Spencer caught a walking catfish after time which denied him the last species prize. 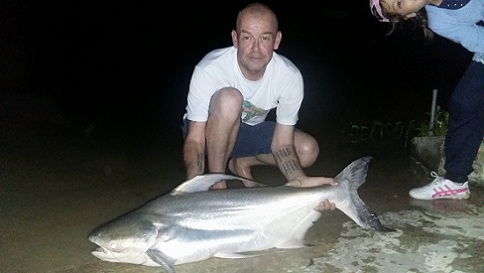 John Kitchen with his prize catch

So the competition ended in stalemate and will be rerun on a date yet to be decided.John Kitchen had the last species and was awarded an excellent rod by Mr Win.

Report by John MacDonald Fishing correspondent for the Buriram Times