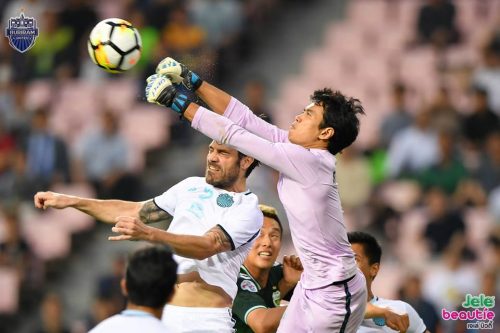 Two sensational strikes, one in either half, were enough to send Buriram out of the Champions League. The Korean league leaders won 2-0 to go through 4-3 on aggregate. It was always going to be tough for Buriram after that injury-time strike in the home game. It could have been much worse for the Thai Champions had Siwarak not produced several outstanding saves to keep them in the tie. 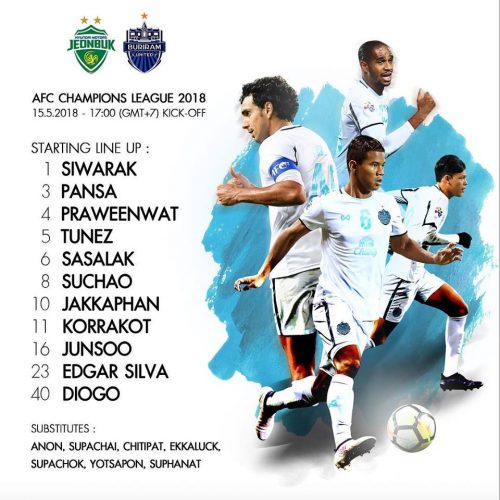 It was vital that Buriram did not concede an early goal but sadly that is exactly what they did. The Koreans looked sharp and they moved the ball about quickly, creating gaps in the Buriram defence. After 13 minutes, following a cross from the right, Siwarak showed remarkable reactions to get down low , diving to his left to keep out what looked a certain goal.

A minute later he had to deal with another low, goalbound shot as he also managed to keep hold of the ball. However, there was little he could do about the shot that saw the Koreans level the tie in the 18th minute.

When the ball was crossed from the right, it was headed back to Lopes about sixteen yards out. The striker hit it first-time with the outside of his right foot and the ball flew into the corner of the net with Siwarak a helpless spectator.

It was a sensational strike but it has to be said that it was dreadful marking by Buriram as they afforded Lopes acres of space.

It was Siwarak to the rescue again in the 26th minute when once more the Buriram defence had been sliced wide open but the keeper made an incredible save and was grateful to see the rebound fly over the bar.

Buriram brought on Ekkaluck for Sasalak in the 42nd minute and shortly after almost grabbed an unlikely equalizer.  Edgar collected the ball out on the right and then found Jakkaphan who sent in a good shot which clipped the top of the crossbar.

So Buriram were still in a tie that could so easily have been beyond them had it not been for Siwarak.

The second-half began rather sedately and Buriram began to see more of the ball. They brought on Supachok for Praweenwat in the 56th minute. Whether it was a tactical switch in order to attack more or as a precaution so as to avoid going down to ten men is not certain.

Two minutes later Buriram had a great chance to throw the tie wide open when Diogo crossed from the right and found Edgar unmarked right in front of goal. However, the big striker failed to get above the ball and head it down and it flew over the bar. A bad miss. 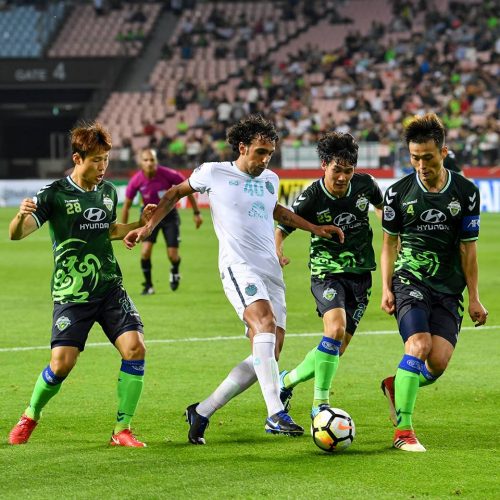 Diogo was a threat wide right but was rarely in the box where he is most dangerous.

Edgar had a chance to make amends from another Diogo right-wing cross in the 70th minute but failed to make contact with ball from five yards out. Buriram were enjoying their best spell in the game and in the 74th minute another cross from the right found Junsoo whose shot was on target but lacked sufficient power to beat the keeper.

The home side responded with a swift break down the left in the 76th minute and the resulting cross was met with a powerful header which Siwarak acrobatically turned over the bar. Buriram then made their final substitution in the 77th minute, bringing on Supachai for the tiring Suchao.

Six minutes from time the Koreans put the tie to bed. They were awarded a free-kick twenty-five yards out and Jaesung sent a sensational shot over the wall and it screamed into the net. A goal fit to settle any game.

So it was the end of the road for Buriram and Jeonbuk were certainly the better team over the two games. However, it must not be forgotten that Buriram qualified from a group which most “experts” believed would see them finish last.

They certainly made a lot of people sit up and take notice and have done much to enhance the global image of Thai football. They did themselves and their supporters proud.

It’s now back to the domestic scene and Buriram travel to the seaside to meet Pattaya on Sunday May 20, 6pm.