A late David goal ended Buriram’s hopes of a treble in a game that lacked passion from both sides. Despite having plenty of possession, Buriram failed to put their opponents under any real pressure, seemingly content to knock the ball about and wait for something to happen.

It was almost like watching a practice match sometimes and it would appear that Buriram did not take Glass seriously enough. There were long spells of possession but there was very little movement up front with players remaining static instead of trying to create openings with running off the ball.

However, the biggest disappointment was the extremely poor quality of crossing. From both dead-balls and open play, Buriram constantly failed to clear the first defender, Korrakot being the worst offender.

Couple that with bad decision making regarding the final ball and it becomes clear why Buriram were beaten. Both Glass goals were the result of naive defending, though Siwarak was very unfortunate with the first. 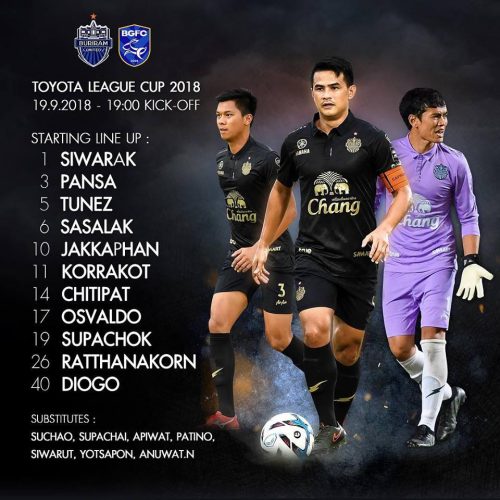 There was little to shout about early on, though Supachok did get in a decent effort in the 7th minute, injuring his elbow as he fell.

Buriram fell behind in the 13th minute when Glass attacked down the left before a cross found Surachat unmarked and his downward header was turned onto the post by Siwarak only for the ball to rebound onto his arm and into the net.

Buriram carved out a good chance in the 15th minute when Korrakot crossed from the left for Diogo to find Sasalak who opted to shoot from an impossible angle and the keeper had little trouble turning the ball round the post. It was the wrong decision by Sasalak who had colleagues well-placed in the middle.

The equalizer did arrive in the 18th minute when Osvaldo latched onto a through ball before being brought down by the keeper as he took the ball past him. A certain penalty and probably the card should have been red not yellow.

Diogo stepped up to send the fortunate keeper the wrong way from the spot.

Buriram were now in control of the game but their football was pedestrian and unimaginative resulting in little goalmouth action. In the 27th minute Supachai came on for Supackok who was struggling with his elbow injury.

Chitipat picked up a yellow card in the 37th minute for retaliation which came as something of a surprise in such a dull game. Three minutes later Buriram had a great chance to take the lead.

Diogo was played clear on goal but inexplicably sent a tame shot straight at the keeper. There was no real intent in his effort and summed the game up perfectly.

A forgettable opening half.

Seven minutes later Osvaldo made a good run down the right but his low cross was just behind the inrushing Diogo. Buriram did have the ball in the net in the 69th minute but both Osvaldo and Diogo were offside.

Straight after , a long ball out of defence sent Osvaldo racing clear down the left but the less said about his attempt on goal the better. 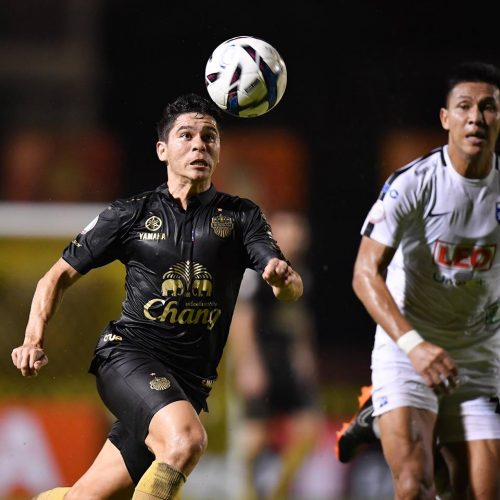 Osvaldo had a night to forget

Buriram came close in the 77th minute when Supachai won the ball and sent a low shot inches past the post. A minute later Osvaldo again got clear down the right. He cut inside and crossed low but Diogo had three defenders around him and Osvaldo really should have had a look up and gone for goal himself.

Little had been seen of Glass as an attacking force but they suddenly found themselves ahead in the 84th minute. They attacked down the right and when the ball came into the box, Tunez failed to get in a clean challenge and the ball was slipped to David who easily beat Siwarak with a low shot.

Buriram brought on Patino for Chitipat as they tried to respond. They won corners and free-kicks but not ONE of them caused even a hint of danger, such was the poor quality of the deliveries.

Not the end of the world, but it’s disappointing to lose a game without going down all guns blazing. I don’t think for one minute Buriram deliberately went into this game thinking they couldn’t lose, but aggression and passion were certainly missing. How they missed Junsoo in that second-half.

Back to league action on Saturday,September 22 when Police Tero visit the Chang Arena. Note kick-off is 8pm.