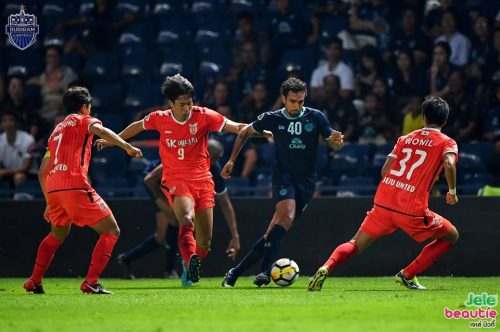 Buriram have a battle on their hands in Champions League.

Buriram United are still looking for their first win in the 2018 AFC Champions League campaign after beating beaten 2-0 by Jeju United at the Chang Arena on Wednesday.

In what proved to be a nightmare start for the Thai League 1 champions, Jeju took the lead inside the opening two minutes when Lee Chang-min skipped past Ratthanakorn on the edge of the box before drilling a low shot into the bottom corner.

Perhaps Siwarak could have done better but it was poor defending that caused the problem.

It was all too familiar after their poor start in China but this time they were made to pay. A controversial penalty after Jakkaphan carelessly tackled from behind left them with a mountain to climb.

Edgar did have a chance to produce an immediate reply for the hosts in the fourth minute when he got in behind the opposition defence at the near post, only for his snapshot to be deflected wide.

The South Korean outfit then extended their lead in the 21st minute but it was not without controversy.

After Narubadin had stayed down injured following a failed penalty appeal, Jeju opted not to put the ball out of play despite their opponents’ appeals but brought the ball up the other end.

Then, Jin Seong-wook went down inside the box under Jakkaphan’s  challenge and a spot-kick was awarded, paving the way for Magno Cruz to send Siwarak the wrong way from 12 yards.

Buriram suffered a further blow when Tunez had to leave the field in the 23rd minute, which meant Buriram would be vulnerable to counter-attack as they chased the game. He was replaced by Supachai which resulted in a big reshuffle with the youngster partnering Edgar up front.

This meant that Buriram’s main threat, Diogo, would spend most of the match wide left which was not was required.

Buriram had to get back into the game quickly and they missed a glorious chance in the 46th minute. Jakkaphan did well to flick the ball over a defender’s head and when the ball came down he took it on the half-volley and blazed over the bar from five yards. An appalling miss.

It is still something of a mystery of how he is Club vice-captain and a regular in the team. His distribution is poor and he is guilty of too many aimless passes week in- week out. Some of the young players must be wondering what they have to do to be given a run in the side.

Buriram carved out another good chance in the 50th minute when for once, Jakkaphan sent over a good cross from the left which Supachai neatly chested down to Edgar but he fired high over the crossbar.

Another chance went begging in the 57th minute when Jakkaphan’s right-wing corner found Supachai unmarked but he headed wide from a good position. Buriram then brought on Supachachok for Jungsoo in the 65th minute and Sasalak for Korrakot in the 75th.

Seven minutes from time Edgar headed over from a left-wing cross. Edgar is a big man but he does not time his jumps well, often meeting the ball when he’s coming down, not at the top of his leap.

With three minutes remaining , Diogo earned himself a yellow card for a needless challenge which means he misses the next Champions League game. Something Buriram can ill-afford.

This was a game that Buriram would have looking to take points from and they now face a monumental task to reach the knock-out stages.

Buriram are back in league action on Sunday, February 25 at Chainat Hornbill, 6pm.