Buriram Come Away With Hard-Earned 2-1 Victory At Prachuap 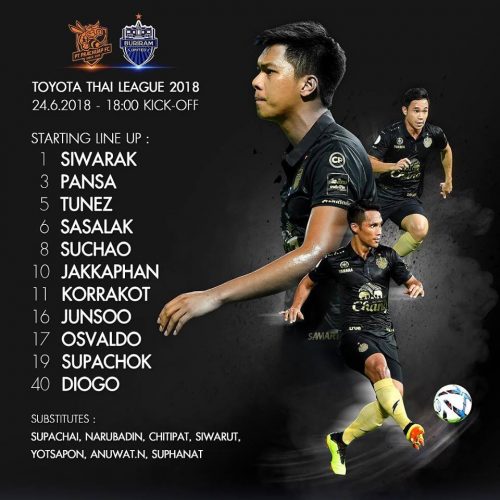 Buriram made the long journey to Prachuap as they tried to take advantage of Bangkok United’s home draw with Ratchaburi the previous evening. They came away with the three points but were made to fight all the way by the home side who have surprised many people this season.

Pansa’s first-half header and a Diogo penalty put them in control at half-time but Prachuap struck back early in the second period to leave the game finely poised. Buriram once again were not helped by the officials, Osvaldo having his strike in the first-half incorrectly ruled out for offside and for the umpteenth time this season Diogo was denied a clear penalty in the second.

The game started fairly sedately, the humid conditions not lending themselves to football played at great pace. There were few openings early on and indeed Buriram were forced into a change in the 18th  minute when Supachai replaced the injured Supachok.

Shortly after, neat build up play saw Diogo play Osvaldo in with a clever flick and his fellow Brazilian finished emphatically. However, Buriram’s celebrations were cut short by an offside flag but replays showed that Osvaldo was clearly onside.

Buriram did take the lead in the 26th minute when following a short left-wing corner, the ball finally reached Sasalak out on the right. The resulting cross saw Pansa rise and head the ball firmly down into the corner of the net. 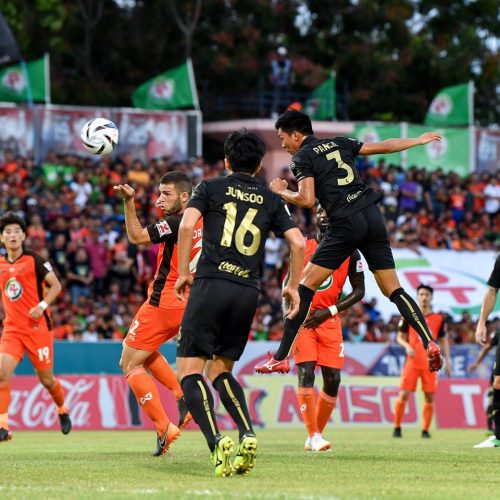 The goal seemed to settle Buriram as they took control of the game. They increased their lead in the 36th minute when Diogo met a left-wing corner at the far post and his shot was clearly handled by a defender, though it was the referee’s assistant who awarded the penalty.

Diogo did the usual from the spot, sending the keeper the wrong way. 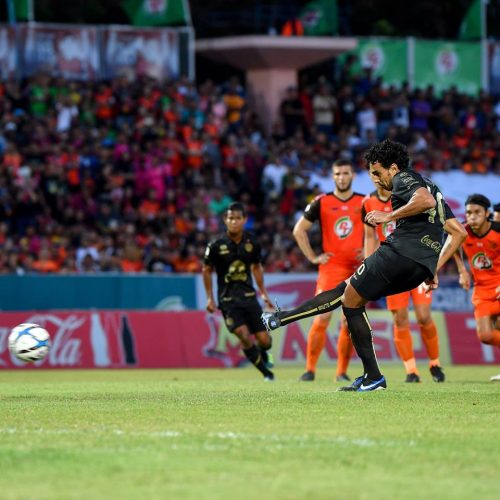 So Buriram went into the interval two goals to the good and looking comfortable. What they didn’t want was to concede early in the second-half but that is exactly what happened.

Buriram gave away a needless free-kick in the 52nd minute and Reis sent in a shot which somehow got through the wall and left Siwarak stranded.

To their credit, this did not rattle Buriram and the game should have been made safe in the 59th minute when a lovely move down the right saw Suchao cross low from the byline to leave Diogo with a simple tap-in. However, he was felled from behind for what was a nailed on penalty.

But for reasons known only to himself, the referee waved play on. This has happened far too often this season and you begin to wonder about some of the officials. 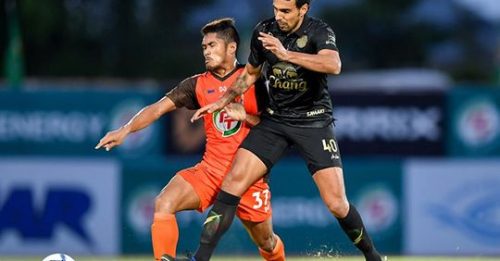 Diogo denied by officials again, though not in this photo.

Prachuap were not causing too many problems, though Jakkaphan did pick up a needless yellow card in the 60th minute. Fifteen minutes later he was replaced by young Suphanat as Buriram looked to make the game safe.

They came close in the 80th minute when Osvaldo fired in a great shot from 25 yards, but it was superbly turned aside by the home goalkeeper. Prachuap thought they had leveled in the 82nd minute when Pansa conceded a soft free-kick out on Buriram’s right,for which he received a yellow card. When the cross came in the ball was headed into the net but the effort was ruled out by a correct offside decision.

That was the only real scare for Buriram though they were reduced to ten men in stoppage time. Pansa stupidly lunged into a wild challenge and the referee had little option but to issue a second yellow followed by a red.

This means he will miss the showdown with Bangkok United next week, something Buriram can ill-afford. Buriram certainly deserved their win but once again the midfield is not carving out many chances. There is no general directing operations and Seul-Ki is certainly being missed big time.

Next up we see Bangkok United visit the Chang Arena twice in four days. First in the FA Cup on Wednesday June 27 6pm and then on Saturday June 30 in a top of the table league clash, kick-off 7pm.

It would be good to see a big crowd get behind Buriram on Saturday.