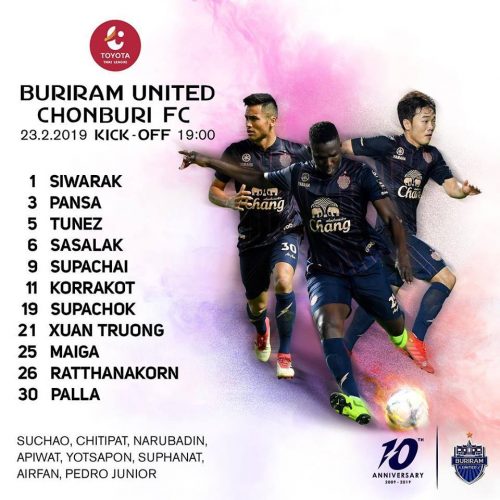 A Supachok double was not enough to give Buriram an opening day victory over Chonburi who finished the game with 9 men.

Two errors by Tunez gifted the visitors a point , though it has to be said that that Buriram were far from convincing. The first-half was fairly uneventful with Supachai wasting Buriram’s best two chances.

However, the second-half  was far different with four goals and two red cards for Chonburi. Supachok created a good opening for himself on the left in the 48th minute but fired wide of the far-post.

Four minutes later Buriram brought on Pedro Junior for Truong Luong and the game changed. Pedro’s strength and directness gave Buriram more impetus , though the home side found themselves a goal down shortly after.

Tunez was caught in possession and when the ball reached Worachit , he beat Siwarak with a cool finish. A bad mistake.

Shortly after Chonburi were reduced to ten men and Buriram took full advantage. Korrakot found Supachok in the left of the area in the 64th minute and the striker hit a low shot which was deflected past a helpless keeper.

A minute later Pedro got clear down the right and sent over a great low cross which left Supachok with an easy finish.

Chittipat came on for Korrakot in the 75th minute and seconds later Chonburi were level. A low right-wing cross was missed by Tunez and Kroekrit came in behind him to score with ease.

Buriram pushed forward in search of a winner but never seriously threatened the visitors’ goal.

It is with a VERY heavy heart that I have to inform you that this will be my last report. I have a serious illness and I have to return to the UK to continue my treatment. Buriram United have become a big part of my life over the last 6 years and I have loved every minute of my involvement with the club. I wish them and the people of Buriram continued success and I will miss my adopted home more than I can ever put into words. I will of course follow events from afar very closely. Take care and I hope you have enjoyed my observations over the years.