A near-capacity crowd watched as Buriram took Muang Thong apart with a 4-0 victory.

A Diogo-inspired Buriram United recorded their biggest ever win over their bitter rivals to send their deliriously happy fans rushing out of the stadium to celebrate. Make no mistake, this was a severe beating and if Buriram had taken all their chances, it would have been significantly worse.

Diogo was simply unstoppable and showed without doubt that he is far and away the best player in Thailand. Muang Thong just couldn’t cope with him and were reduced to using foul play on numerous occasions. It’s just a pity the referee chose to ignore the incidents that occurred in the penalty area. Again !

However, the whole team played their part with the midfield taking a firm grip from the start , leaving the visitors often having to go backwards on the few occasions they actually had possession. Junsoo was outstanding and received a warm ovation from the crowd when cramp finally got the better of him. Something Muang Thong couldn’t do ! 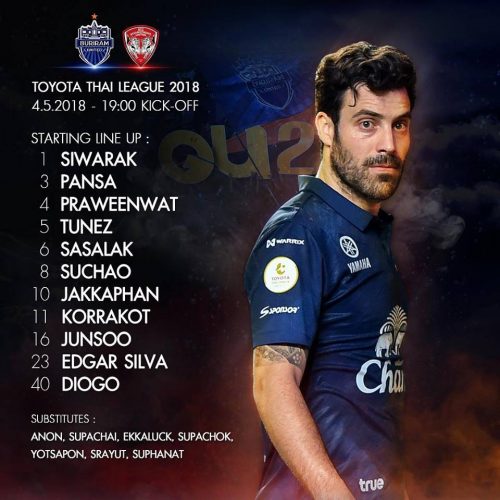 The heroes of the night !

Buriram opened brightly and Diogo fed Korrakot down the left but he failed to look up and wasted the cross. A great chance went begging in the 5th minute when Suchao’s dangerous inswinging right-wing corner had the keeper in all sorts of trouble and the ball broke for Pansa to lash his shot wildly over the bar.

Two minutes later Muang Thong had their first of only two chances in the game when they were allowed to progress unchallenged to the edge of the area and Siwarak failed to hold onto a low shot. There still seemed little danger but Tunez’s weak clearance went straight to Chappuis but the former Buriram man pulled his attempt wide of the far-post.

Buriram then forced a couple of corners which the keeper struggled to deal with. The breakthrough came in the 24th minute and what a beautiful goal it was. The ball was worked down the right to Diogo who sent over the most perfect cross for Junsoo to rise and a power a great header into the net.

A goal of true quality. It was almost two a minute later when Edgar played Diogo in down the right and the cross-cum-shot clipped the top of the crossbar. More excellent play down the right saw Sasalak combine with Diogo and when the keeper failed to hold the Brazilian’s low shot, Edgar hit the ball into the side-netting from a narrow angle.

Just a few words about Edgar. His all-round play was excellent. He won everything in the air and linked up well with supporting teammates. However, his finishing was once again very disappointing, showing a complete lack of confidence and composure.

Buriram got the second goal they craved in the 30th minute. Sasalak was brought down just outside the area, just right of centre. Diogo took the kick and his well-struck shot took a deflection and the keeper could only help the ball into the net. A touch of good fortune, but well-deserved.

It got even better for Buriram in the 37th minute when Korrakot sent over a high cross from the left. Diogo’s header looped into the air and Suchao, showing great awareness, headed the ball back to him. Diogo calmly took the ball to his left to give him the time and space to send a firm shot into the net. There was a slight deflection but it was going in anyway. 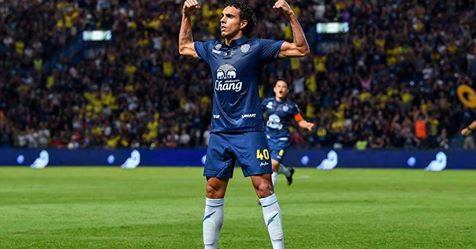 So an unbelievable half and it was a disconsolate Muang Thong team that trudged off the pitch.

The second period carried on in the same vein as the first with Buriram dominating possession, though Suchao did pick up a deserved yellow card in the 50th minute for an unnecessary rash challenge. Two minutes later, Korrakot’s left-wing corner was met at the near-post by Edgar, having cleverly peeled away from his marker, but the header was inches too high.

Buriram were now attacking at will and a great passing move down the right in the 58th minute saw Diogo dummy the low cross, only for Edgar to make a complete hash of the chance.

Just on the hour mark, Buriram made their first change when Supachok came on for Jakkaphan, a clear sign of attacking intent. Three minutes later Edgar played a lovely one-two with Junsoo to leave himself unmarked in the box but he simply lashed at the ball to send it high and wide. 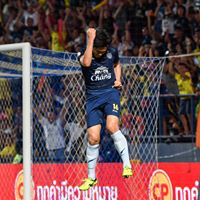 The outstanding Junsoo celebrates his goal.

Muang Thong created their best chance of the game in the 65th minute when neat first-time passing left Wattana in the clear but Siwarak was on him in a flash to make a great block with his legs. Superb goalkeeping .

Back came Buriram and Diogo was close to completing his hat-trick in the 70th minute when he met Korrakot’s free-kick with a firm header, only for the keeper to just get his fingertips to the ball and turn it over the bar.

Next it was Supachok’s turn in the 74th minute when superb close control in the box gave him a clear shooting chance but he lashed it wildly over the bar. He really does need a goal to calm him down.

It was all Buriram and a lightning break out of defence down the right in the 76th minute saw Sasalak race clear only to put his shot into the side-netting with supporting colleagues waiting for the pull-back.

The impressive Junsoo had to leave the field in the 80th minute because of cramp, being replaced by Supachai. Two minutes later, a lovely flick on by Edgar sent Diogo clear down the left but this time he fluffed his lines with a low effort which was neither a shot or a cross.

However, the much anticipated fourth goal finally arrived in the 85th minute. More wonderful play by Diogo saw him get clear of the chasing defenders, only to brought down from behind just outside the area. This time it was Korrakot who was entrusted with the kick and he spotted a gap to the left of the wall and drilled a low shot into the corner.

It was strange defending because that same gap was evident when Diogo scored with his free-kick., though he chose to ignore it.

Anon came on for Edgar for the last few minutes before the referee brought to a close a memorable night for Buriram United.

For me, the only downside of the performance was Korrakot. Despite his goal, he still should be making more of the space that he is afforded. He makes no attempt to get past defenders and get to the byline and often tries to cross when it’s obvious that it will be blocked. He needs to be more positive and accept that sometimes it won’t come off. But at the moment, it’s easy for defenders as they know he’s not going to take them on.

Next up is the Champions League with a tough home game against current Korean league leaders Jeonbuk on Tuesday, May 8, 6pm. We wish the boys all the best. Whatever happens, they have done so well to get this far against difficult opposition.

The match report will be delayed due to other Buriram Times commitments. Apologies in advance.