Buriram Do It The Hard Way…..Again Against Nakhon Pathom !!! 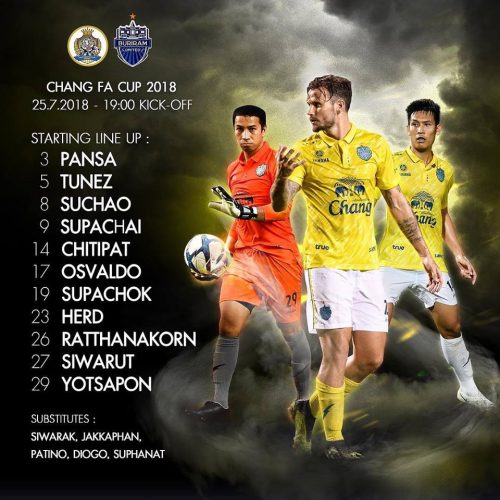 Buriram made heavy weather of seeing off Division 4 minnows Nakhon Pathom with Supachok’s extra-time strike giving the champions a 2-1 victory. It was a very disappointing performance by Buriram who lacked any kind of game plan and they appeared to think that simply turning up would be sufficient.

Diogo was quite rightly rested but Buriram were then left without a recognized striker, odd with both Patino and Suphanat on the bench. Buriram almost got off to a nightmare start in the 4th minute when careless play by Ratthanakorn allowed Diego to gain possession before crashing a shot against the crossbar. 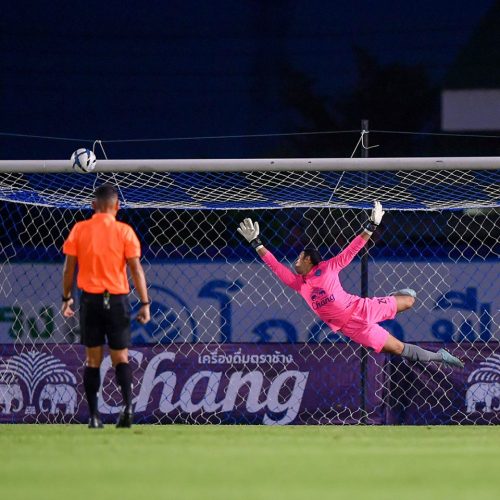 Yotsapon saved by the crossbar.

Yotsapon then got down well to a low shot in the 8th minute as the home side put Buriram under pressure. They had to wait until the 17th minute to get in a strike on goal when Osvaldo fired a free-kick from the right of the D wide.

A minute later though, Buriram took the lead with a fine goal. Supachai allowed a long ball out of defence to bounce once as he advanced down the right before hitting a lovely volley into the far corner of the net. 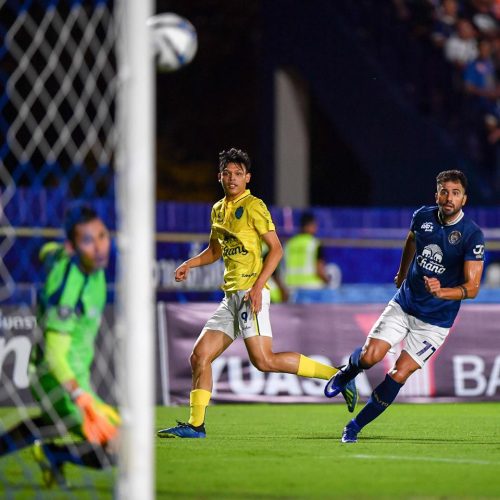 Herd was certainly being combative and incurred the referee’s wrath in the 22nd minute following a bad tackle which could have earned him more than a yellow. Indeed, he was lucky to stay on the pitch moments later when he wrapped his arm round an opponents neck. Totally irresponsible .

That was about it for the first-half, with neither goalkeeper being troubled any further.

Buriram wisely brought on Suphanat for Herd as it would have been unlikely that he would have stayed on the pitch for long. Supachai was almost gifted a second in the 47th minute when his long-range shot squirmed between the keeper’s legs but he had time to turn and gather the ball.

Buriram were looking a little more positive and should have gone further ahead in the 53rd minute. Neat passing saw the ball reach Suchao in acres of space but the skipper could only send the ball out for a goal-kick. It was neither a shot or a cross and he knew he should have done a lot better.

Three minutes later the home side broke clear but Pansa came to the rescue with a great saving tackle. Buriram then brought on Diogo for Osvaldo in the 60th minute. Two minutes later a left-wing Pathom corner resulted in a scramble but Yotsapon did well to keep the ball out.

They were through again down the left in the 71st minute but Yotsapon again did well and from the rebound, Tunez got in a good block. Buriram then made their third and final change, bringing on Jakkaphan for a very disappointing Ratthanakorn.

Just as it seemed Buriram had weathered the storm, they gifted the home side an equalizer in the 78th minute. An inswinging right-wing corner was not dealt with by Yotsapon at the near-post and Diego turned the ball into the net to spark wild celebrations.

Neither side could find a winner so the game moved into extra-time. There were a lot of tired legs out there and no real chances were created in the first period.  As the game looked to be heading to penalties, Buriram produced a move of real quality to break the home fans’ hearts in the 114th minute.

Supachok played the ball into Supachai who then sent a great return pass for Supachok to run onto and deftly flick the ball past the keeper with the outside of his right-foot. It was the type of finish we were getting used to before Supachok’s injury and it will do his confidence the world of good. 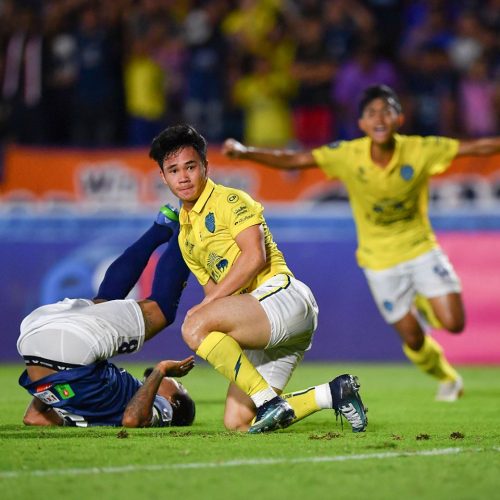 So Buriram sneak through by the skin of their teeth and now face an interesting game at Thai Port in the quarter-final.

Next up is a home league match against Suphanburi on Saturday, July 28, 7pm.