Buriram survived a nervy opening before they settled the tie with three second-half goals. They fell behind with a freak Pansa own-goal but Patino scored his first goal since his return to level things up. The home side dominated the second-half with Diogo again in imperious form.

Two more goals for the Brazilian along with a sumptious Supachok strike saw them move into the semi’s. 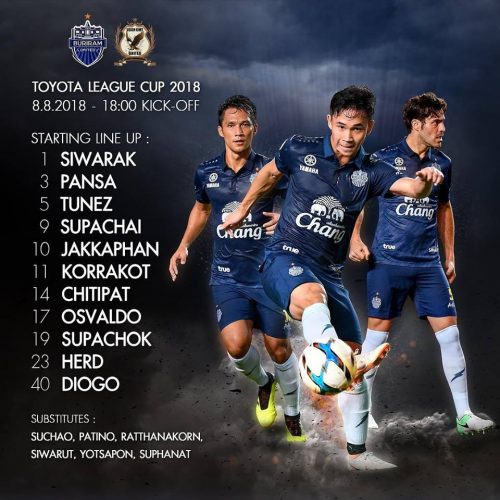 Buriram had a shock in the first minute when Siwarak allowed a long-range shot to strike the crossbar but the ball rebounded to safety. The champions hit back in the 3rd minute when Supachok played Osvaldo in but he delayed too long and his shot was blocked.

It was the Brazilian’s final involvement as he picked up a knock and was replaced by Patino after 7 minutes.

Ubon took a surprise lead in the 15th minute when Siwarak made a complete mess of a harmless low shot . The ball ran loose and when a shot from a tight angle came in, it struck the post and rebounded against the retreating Pansa and ended up in the net.

Buriram came close to leveling things up in the 26th minute when Diogo and Supachok combined superbly on the right to find Herd whose deep cross was headed back across goal by Patino. The ball was turned behind for a corner which was half-cleared to Supachai on the edge of the area and he hit a fierce shot which smacked against the bar.

Ten minutes later Jakkaphan sent Herd clear in the right-side of the area but with the unmarked Patino screaming for a cross, the Australian sent the ball wide of the far-post.

However, Herd redeemed himself in the 38th minute  when he took Supachok’s pass wide right before pulling the ball back for Patino to take a touch before hammering the ball high into the net. 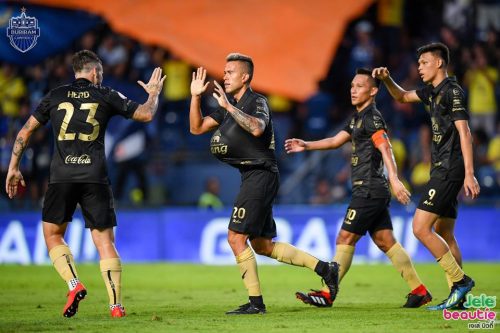 Buriram won a free-kick in first-half stoppage time which Korrakot sent arrowing towards the top corner. The keeper did well to turn it over the bar but when he landed, his head collided with the post .  After a lengthy delay, he was stretchered off and replaced by the number two keeper. Hopefully, it isn’t too serious and he makes a speedy recovery.

The second-half began with Buriram on the front foot and Diogo brought a good save from the stand-in keeper in the 51st minute. However, five minutes later the home side took the lead. Jakkaphan curled a cross in from the left which a defender diverted into Patino’s path. The keeper did well to block the shot but the ball rebounded straight to Diogo who wrong-footed a defender before firing into the empty net. It was a cool finish which the Brazilian made look ridiculously easy.

Shortly after Ratthanakorn came on for Supachai and three minutes later, Buriram made the game safe. Patino tried to play Diogo in but the ball struck a defender and looped up into the air. When it came down, Diogo was first to react as he stretched to gently lift the ball over the keeper and into the net. Another excellent finish.

It should have been four in the 69th minute when excellent interplay between Patino and Diogo left Korrakot with a clear sight of goal but he fired hopelessly wide. Buriram brought on Suphanat for Herd in the 75th minute and the youngster looked completely at home playing wide right.

It looked odds on that Diogo would complete his hat-trick in the 84th minute when he ran clear on goal. The keeper clipped his ankle as he tried to go past him but Diogo stayed on his feet but sent his shot just over the top.

The fourth goal did finally arrive in stoppage time when Supachok gained possession in the left-side of the box. There seemed very little on but he looked up then curled a superb shot into the far corner of the net. 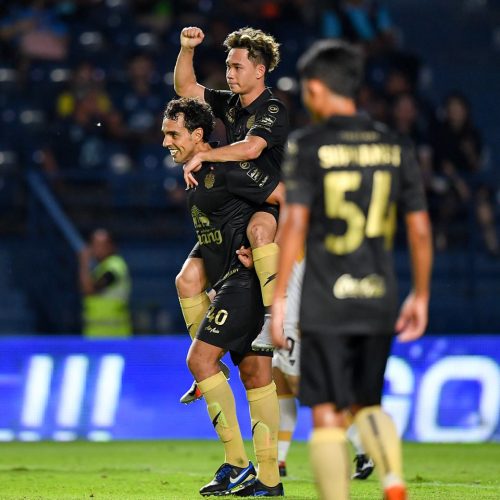 Supachok delighted with his goal.

Supachok had looked more like his old self and you could see the confidence slowly returning. The goal is just what he needed and hopefully it will be the first of many.

Diogo was again superb but the really good news is that there were good signs that an understanding was developing with Patino. Buriram look far more dangerous when Patino is in the side rather than Osvaldo.

Next up is a difficult home league game with Chiang Rai on Wednesday September 5 ,7pm.