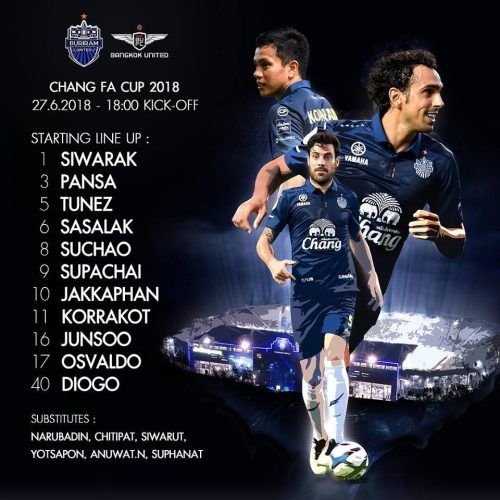 Buriram and Bangkok United both appeared to have Saturday’s top of the table league clash on their minds as they played out a rather tame goalless draw in the FA Cup. Chances were few and far between , though it has to be said that United had their keeper to thank for keeping them in the tie.

Buriram were more or less at full strength with Narubadin making a welcome return to the bench following his serious knee injury. It was a game where neither side went at it full tilt though it may be a different story on Saturday. Even Diogo appeared somewhat subdued though he was still Buriram’s only real threat.

The game got off to a bad start for Buriram as Suchao went into a reckless aerial challenge in the first minute which saw him leave the field with a cut head and he was replaced by Anuwat.

Buriram had a bit of a scare in the 18th minute when a shot was deflected on top of the crossbar but it was the home side who were inches away from taking the lead in the 26th minute. Diogo collected the ball some thirty-five yards out before thundering a shot against the underside of the bar.

Ten minutes later Sasalak made a good run down the right before sending a dangerous cross into the area which a defender almost headed into his own net. Oswaldo then drew a good save from the keeper following a good run down the left to leave the game goalless at the interval.

Diogo then came close in the 46th minute when he rose to meet a right-wing cross, only for the keeper to make a good save diving to his left. There were no more clear openings until the 72 minute when Osvaldo latched onto a clearance from the defence to race away down the right. His cross was met on the volley by Jakkaphan only for the keeper to make another excellent,reflex save. 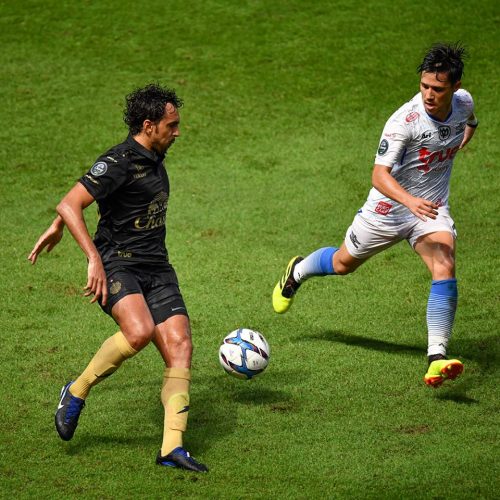 Buriram brought on Narubadin for Supachai eight minutes from time as Diogo headed over shortly after from Sasalak’s cross. Sasalak and Jakkaphan then both picked up yellow cards as both teams were anxious not to give the game away late on.

That was more or less it as the game headed into extra-time,something neither side wanted.

Diogo thought he’d broken the deadlock in the 95th minute when he met Narubadin’s low right-wing cross only for the keeper to make a stunning save diving to his left.

Six minutes later Narubadin played a neat one-two with Sasalak but then went for glory when a cross would have been better. Siwarak made a smart block in the 106th minute before Buriram brought on Suphanat for Korrakot. 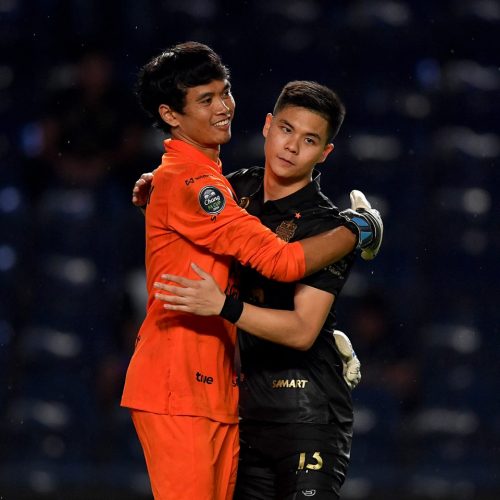 Siwarak happy to see Narubadin back.

It was looking like penalties but Tunez met a right-wing corner with a great header only to be denied by a flying keeper yet again.

So it was penalties and Siwarak saved United’s second penalty only for Pansa to have his fourth one saved. There were no more misses and with the score at 8-7 to Buriram, a hapless United player sent his shot high over the bar to send Buriram through.

The players come back to do it all again on Saturday, kick-off 7pm. Let’s hope there’s more action !!