Buriram Fall To Another Defeat On The Road At Sukhothai

Buriram went down to their second successive 1-0 away defeat at Sukhothai but they can count themselves very unlucky to lose a game they dominated for much of the time. A combination of poor finishing and dreadful refereeing was responsible and it leaves them only two points clear at the top.

Ironically, this was Buriram’s best performance for some time as they were more direct and incisive. Sukhothai only had two chances and they took one of them . Buriram had several excellent chances but wasted them, Edgar being the main culprit. However, in his defence he did hit the crossbar and had a perfectly good goal disallowed. Exactly why, only the referee knows. 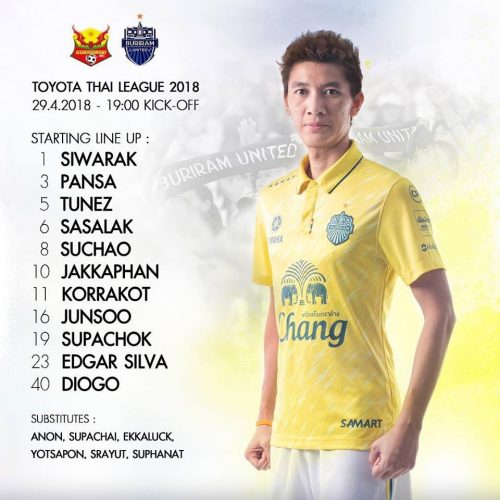 Buriram should have taken the lead in the 2nd minute when a lovely move down the right saw a perfect low cross delivered across the goalmouth. It only needed a touch but Edgar missed the ball completely. A bad miss.

The visitors continued to press forward at every opportunity and Supachok was unlucky in the 12th minute when his twenty yard shot was turned away by the diving keeper. A minute later Suchao crossed from the left and Edgar was at the near post but again failed to make contact with the ball.

Sukhothai’s first foray of any note came in the 20th minute when the lively Bagio brought a good save from Siwarak, diving to his left.

Shortly after Edgar went close but his low shot went just wide. The referee then made the first of a number of “contentious” decisions in the 24th minute when Diogo was clearly pushed in the back following a left-wing cross but no penalty. Then Edgar had the ball in the net but was correctly ruled offside.

Enter the referee again in the 27th minute when Tunez was held  round his neck from a right-wing corner but again nothing was given. Both incidents were blatant penalties and sadly you start to wonder why this is happening so frequently.

From the resulting right-wing corner, Buriram almost took the lead  when Edgar met the ball with a firm header only to see it bounce off the crossbar.

Sukhothai then came close in the 30th minute when a header from a right-wing corner was inches wide, again with no-one on the post.

Jakkaphan picked up a yellow card in the 39th minute and Pansa made a great interception in the 45th minute following good work by the ever-dangerous Bagio. ( a player I would love to see in a Buriram shirt !)

The second-half followed the same pattern as the first , with Buriram penning the home side back in their half. Corners and free-kicks came and went before the referee made his biggest blunder of the night in the 67th minute. A good move down the left saw Korrakot cross perfectly for Edgar to rise and bury his header beyond the keeper. There was no use of arms but it was disallowed for a foul on the keeper. 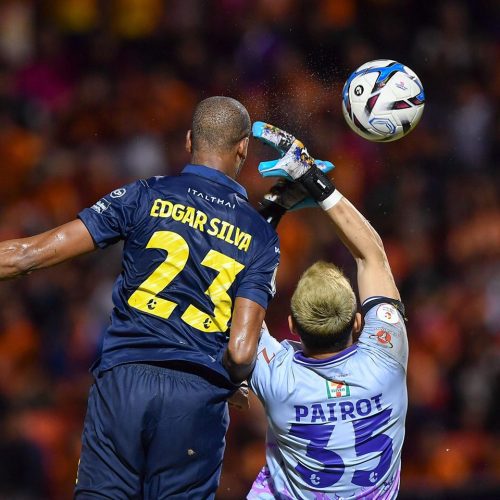 A minute later Edgar wasted another great opportunity when Sasalak crossed from the right and the striker controlled the ball superbly only to lash it high and wide from six yards. Edgar had a chance to make amends in the 70th minute when Sasalak again found him with a cross from the right but the header was way too high.

As often happens in games when a side dominates a game but wastes chances, Buriram were hit by the sucker punch in the 79th minute. A quick break saw the Buriram defence stretched and when the ball came in to the box from the right, Njiva collected it and far too easily turned inside Pansa before firing a low shot into the corner of the net.

Buriram responded by bringing on Anon for Jakkaphan (too late!) but couldn’t find an equalizer. Indeed, the referee wasn’t finished as Edgar was guilty of a blatant shirt-pull following a corner but again nothing was given.

As stated earlier, this was a good team performance and no question Buriram deserved to win. Unfortunately, all the chances fell to Edgar who looks like a man who doesn’t really want to be on the pitch. It is sad to see a player get like that and who knows what would have happened if the referee had not robbed Edgar of his “goal”.

Next up is the visit of Muang Thong on Friday, May 4, 5.45pm. Let’s have the ground full so we can give our “friends” from Bangkok a “warm” Buriram welcome !