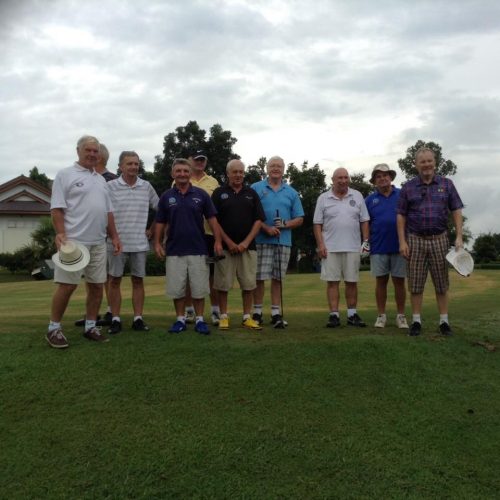 Buriram Golf Society’s latest away jaunt saw them return to most members’ favourite destination – Khon Kaen. The trip had been postponed a week from September 18 due to the expected arrival of typhoon Doksuri.

As it turned out Khon Kaen was bathed in sunshine.

Eleven golfers set out on Monday September 25 to meet at Dancoon Golf Club. There was light rain for most of the journey but thankfully by the time we arrived it had stopped.

The players had been drawn into two four-balls and a three-ball for the Individual Stableford Competition. As a bonus, an extra competition had been added where each team had a ball marked in red . Players took turns to use it and a separate score with the “red” ball was kept until the ball was lost.

Tee-off time was 10am and around twenty minutes later the rain returned. Not torrential but more than enough to get you very wet. The course looked in good condition though it was obvious that the groundstaff had not been able to get the mowers out for a while.

That coupled with the numerous worm casts made it rather difficult to get a good lie. Such was the eagerness to get started, no official decision was made on preferred lies. Two groups decided to prefer their lies anyway, one strictly adhered to the rules and didn’t !

As a journalist of impeccable integrity, I will leave it to you to decide which group I was in.

The conditions were difficult and even holding the club was a challenge. One I failed to rise to. I “don’t do rain !” However, others were made of sterner stuff and came in with some good scores.

Red ball winners were Colin Bradwell, John Ubex  and Peter Thripp who actually kept their ball all the way round.

The players were happy to reach the safety of the clubhouse and one or two had a couple of beers. Personally, I was soaked to the skin and was shivering uncontrollably and only wanted to get to the hotel.

We eventually headed off to the Boss Tower Hotel, which is superb value at 390bht per night. (No breakfast)

After a very welcome warm shower and a short rest, the group met up at a steak house for an evening meal before heading off to renew old acquaintances in a couple of bars we usually frequent.

We were certainly treated like long lost friends and were provided free samples of a bbq and a drink by the proprietor of one of the bars. The beer flowed somewhat and apparently some free-style dancing went on. Eventually the party began to break up as individuals headed back to the hotel.

Having drifted very quickly into a deep sleep, I was rudely awakened around 1am by a very familiar sound. A rather interesting rendition of “Little Ole Wine Drinker Me” was echoing along the corridors of the hotel.

Tradition prevents me from naming the culprits but one is regularly rather prone to bursting into song and has a VERY loud voice, the other is short and makes pies !

Did I really do that? 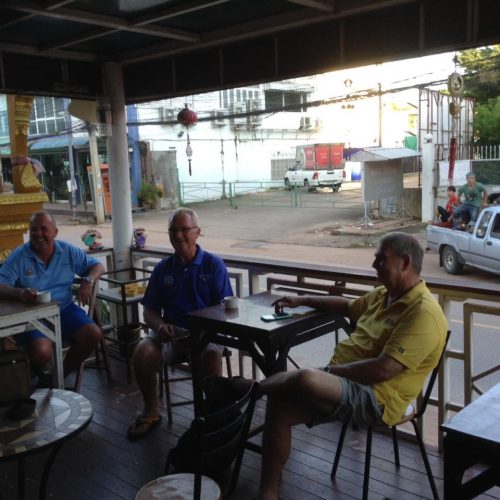 Fortunately, there was no sign of rain and indeed it became rather hot at times.

The players went out in reverse order after the previous days scores. The course was in excellent condition and the greens were lightning fast, making many of us look stupid at times. ( not difficult,thinking about it!)

The caddies were excellent and certainly our group had a great laugh with them. Peter Bourne’s Thai went down a storm ! The course played very long but it was a pleasure to be there. Once again Colin Bradwell was the winner with 30pts, 2nd was Mike Picard 27pts and 3rd Peter Tripp 26pts.

The group assembled in the club house for the final presentation which saw Colin Bradwell the Trip Champion with 64pts, (an excellent effort), 2nd was Mike Picard with 58pts and 3rd was Peter Thripp with 53pts.

Then it was back to the hotel to get ready for another night on the town. There were obvious signs of weariness as the group splintered to go and eat. When we met up again in the bar, the hilarity of the previous night was in short supply.

However, it was an enjoyable if subdued evening and everyone was in bed somewhat earlier than the previous night.

The following morning we headed to the Blue Bar for breakfast at 7.15am. It was a full English and you had the choice of large or small. Large was NOT the right choice !

It was then on to the Agricultural Course for a final nine holes and it was a weary bunch that teed off on the lake inundated track. It wasn’t in the greatest condition but Tony Murphy was the winner with 16pts.

Finally, it was back to Buriram. It was a shame about the rain on Monday but it did not detract from a wonderful trip. It’s always a pleasure to play Singha Park and the company was first-class.

Plenty of laughs, never a cross-word and I’m grateful to everyone for making it a trip to remember. Thanks in particular to Captain Colin for making it all happen, ably assisted by Vice-Captain Keith.