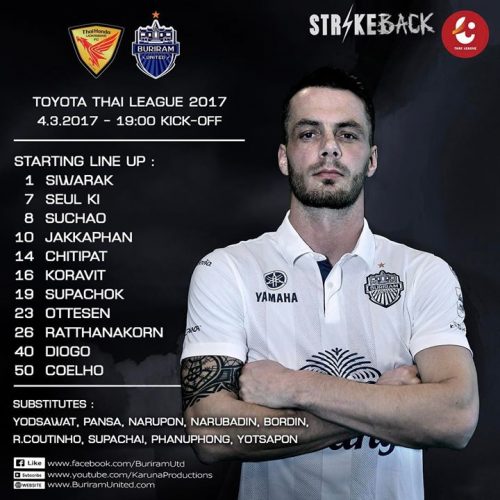 On paper a 5-1 victory away from home looks pretty convincing but in reality the performance was far from it. It is possibly a unique occurrence that a team scores five yet the man of the match is their goalkeeper.

This is what happened here with Siwarak having to make several outstanding saves as the defence in front of him was breached far too often and far too easily.

The hero should have been young Supachok as he notched the first hat-thick of his promising career with some vey accomplished finishing. Diogo was outstanding,showing he is genuine class with some touches that would have graced any league in the world.

Again, Seul-Ki was excellent in the holding role but Suchao was unable to make a real impact on the game and it appears that last year’s serious knee injury may have signalled the end of an illustrious Buriram career.

There were changes at the back with Ottesen coming in for Pansa who did not have a bad game last week. It is understandable that the defence is proving a problem as it doesn’t remain the same from one game to the next.

Why Buriram are persisting with three at the back is beyond me. They need some stability in the middle and perhaps playing Ottesen AND Pansa as a central pair maybe the answer.

The right-back berth is still proving a problem as Chittipat continues to look out of his depth there. Whatever, chopping and changing means the defence is unable to get used to playing as a unit.

Buriram made a bright start to the game but it was the home side who were unlucky not to take the lead in the 18th minute when they hit the post then saw the follow-up come back off the crossbar.

Buriram responded by opening the scoring two minutes later. Ratthanakorn swung over a left-wing corner which evaded the keeper, leaving Diogo to power in a header at the back post.

Buriram looked to increase their lead with Diogo posing a constant threat. However,his strike partner Coelho was not having the best of nights despite his willing running.

On the half-hour mark, Buriram were lucky to escape when there was a frantic scramble in the area following a free-kick but they managed to clear the ball to safety.

Buriram did get the important second goal in the 37th minute with a superbly taken goal by Coelho. He ran onto a long ball from Seul-Ki to get in front of the defender before showing excellent technique as he rounded the keeper and fired into the empty net with his left-foot.

Siwarak then made an excellent save in the 41st minute, turning the ball round the post following a corner. Just before the interval, Buriram broke quickly and Diogo was foiled by a good save from the home keeper.

It had been an entertaining half with the promise of more goals to come at either end. 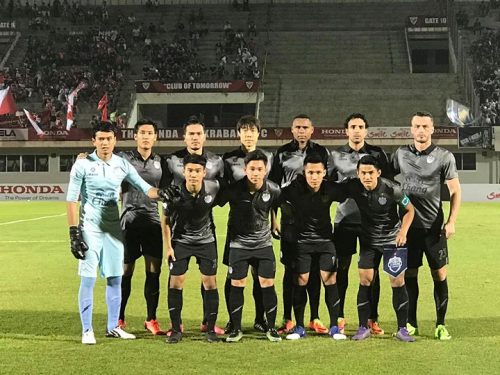 Seul-Ki received an early yellow card for pulling a player back before Siwarak produced a fine save after a right-wing cross. From the resulting corner, a static defence were fortunate to see a free header fly straight at a grateful Siwarak.

Buriram then scored their third in the 51st minute with Diogo the architect with a sublime piece of skill. He collected the ball down the left, taking the defenders wide before wrong-footing them with a back-heel inside which sent Supachok clear on goal and the low finish was cool and precise into the far corner.

It was four six minutes later with Supachok cleverly beating a defender before calmly slotting the ball past the helpless keeper. It really was a very well-taken goal which bodes well for the future.

Shortly after the largely anonymous Suchao was replaced by Narubadin.

Siwarak was in action again after 67 minutes making a fine save only for Jesus to put the ball in the net from an offside position. A good call by the assistant referee.

The Buriram keeper denied the home side again in the 71st minute when he just managed to fingertip a goal-bound effort onto the crossbar.

Jakkaphan then went off to be replaced by Phanuphong before Korawit was shown a yellow card after a clumsy challenge. Honda had another chance to score when a low cross was completely missed by everyone when the merest of touches was all that was needed.

Nine minutes from time Ratthanakorn let fly following an excellent team move, only to be denied by a good save. At the other end Siwarak made another fine save, diving low to his left.

Deep into stoppage time Supachok completed an excellent hat-trick when he collected a through ball before coolly rounding the keeper to score.

Siwarak was then finally beaten when a cross from the right was played forward for Kannoo to score from close range. The look on Siwarak’s face said everything as he was desperately upset not to keep a clean sheet.

All this means that Buriram go to the top of the league with both Ubon and Muang Thong playing today. A good result, but Buriram’s defensive frailties ARE going to be punished by good sides unless changes are made.

Supachok’s finishing was superb and hopefully he can go on to realise his undoubted potential.

Next up is Nakhon Ratchasima at home on Wednesday March 8, 6pm.