Buriram were three minutes from extending their lead at the top to seven points when slack marking at the far post allowed Assumpcao  a free-header from point blank range.

However, the visitors had only themselves to blame after spurning a host of excellent chances, especially in the second-half. Bastos, Jakkaphan, Seul-Ki and Coelho were all guilty of bad misses whilst their opponents, for all their pressure, created very little.

Muang Thong, as expected, pushed Buriram back early on, but the defence held firm and Buriram came more into the game.

There was still no Diogo, though he was once again on the bench. It was good to see Supachok back among the substitutes and it could be a timely return as it looks as though Anon may have picked up a serious injury.

Muang Thong forced a few early corners which Buriram dealt with comfortably, though Siwarak did save a Heberty shot with his body but there wasn’t any real danger. 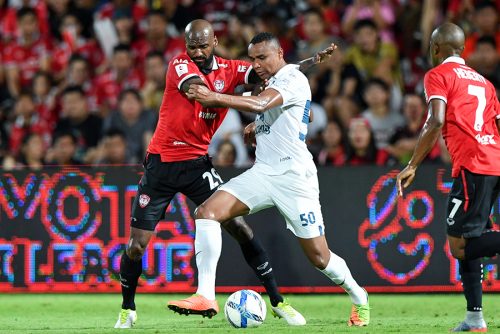 Buriram threatened in the 12th minute when Anon ran clear down the right channel, only to be bundled over in the box. Had it occurred outside the area, the referee would undoubtedly have awarded a free-kick.

However, it doesn’t have to be a bad foul for a penalty to be given. Any foul in the box (apart from obstruction) is a penalty. Plain and simple.

Buriram came close in the 19th minute when Jakkaphan found Bastos in the right side of the area and the Brazilian fired in a rasping shot which Kawin just managed to get a fingertip to and turn over the bar.

Another great chance came and went in the 31st minute when Bastos’ right-wing corner found Coelho unmarked but he headed wide from four yards.

Supachai came on for the injured Anon in the 41st minute and two minutes later the home side almost took the lead. Heberty was fortunate to be able to collect a rebound  left of the goal and he flashed the ball across the goalmouth which the onrushing Adisak got a toe to but was unable to turn the ball in from almost on the goal line. A let-off !

In first-half stoppage the unpleasant side of Heberty came to the fore when he went down clutching his face after colliding with Supachai when the contact was obviously nowhere near his head.

I personally would find it difficult to shake any player’s hand at the end of the game who did something like that. No yellow card either.

So all-square at the interval, with Buriram being far happier with that situation than their opponents.

The second-half got off to a sensational start with Buriram taking the lead with an incredible goal from Bastos. They were awarded a free-kick out on the left, some forty yards from goal.

Bastos struck it perfectly at pace and the ball sailed over Kawin, who was correctly a couple of yards off his line, before dropping under the bar at the far post. 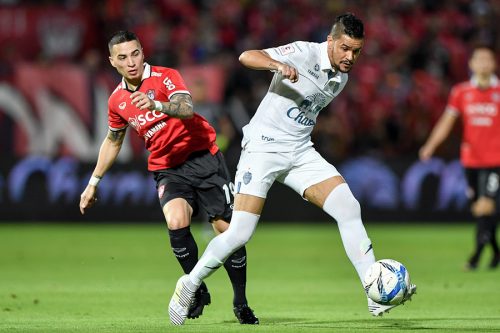 First reactions were that the keeper was badly at fault but on seeing the replays, there was little he could do. Whether Bastos intended a strike on goal, only he can say. But the result was Buriram had got the lead they so badly wanted.

As often happens in these games, it knocked Muang Thong for six and Buriram had the opportunities to kill them off. In the 51st minute lovely interplay saw Coelho through on goal with only Kawin to beat but his effort was too high.

A minute later more excellent passing saw the ball pulled back from the right, only for Seul-Ki to balloon it over the top.

On the hour, Bastos got away down the right and his drilled low cross just evaded the stretching Supachai with the goal gaping. Five minutes later Bastos collected Ratthanakorn’s low right-wing cross before sending a low shot towards the far-post which Kawin just managed to turn away for a corner.

Supachai then picked up a foolish yellow card before Buriram brought on Suchao for Ratthanakorn in the 76th minute.

Another golden opportunity was missed four minutes later when Jakkaphan got to the byline down the right before pulling the ball back for the unmarked Bastos to blaze over the bar.

Jakkaphan was then replaced by Koravit in the 83rd minute before a swift break out of defence saw Seul-Ki race clear on goal but he failed to at least hit the target. 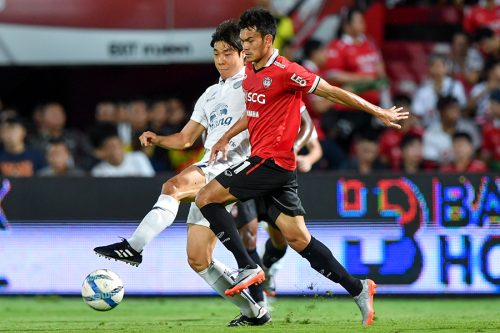 Buriram were made to pay for their wastefulness in the 87th minute when they allowed the home side far too much time and space wide right and when the measured cross came in, it was an easy headed finish with Pansa failing to get in a clearing header.

Narubadin picked up a yellow card in stoppage time as the referee signaled the end of an enthralling encounter. Yes, Buriram will be disappointed but they would have taken a point before the game, especially with no Diogo.

They played their nearest rivals in their own back-yard and created enough openings to win comfortably, no mean feat.

However, the missed chances are a concern. It’s not the fact that they were not put away, it’s the number of times that players failed to hit the target.

If the keeper makes a save, good luck to him but not working him when having a clear sight of goal is a cardinal sin. Let’s hope Diogo returns back to full fitness after the break.

Next up is Ubon at home on July 29, 8pm. The reason for the delay can be read in an article by a Thai Port fan which I will publish. I’m sure you’ll find it “enlightening” !!!