Buriram withstood a torrid second-half fight back by Police Tero to come away with a vital victory. Even when the home side were reduced to ten men, Buriram were unable to take control of the game.

It was a different story in the first-half when two Edgar headers saw Buriram in cruise control but the half-time substitution of Supachok for Junsoo appeared to change the course of the game. 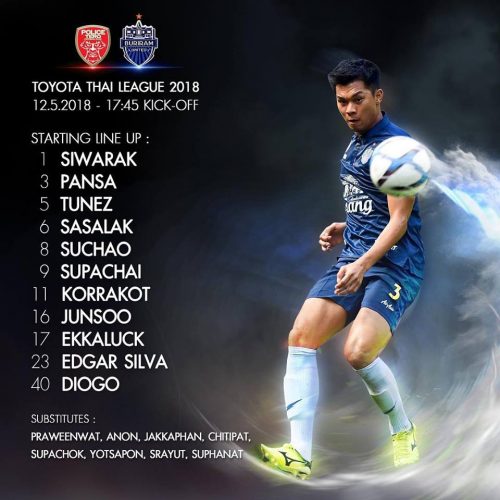 Buriram handed a debut to 34 year-old Ekkaluck and having a recognized left-back in the side gave the defence a more balanced look about it.

The game began at a rather sedate pace as Buriram were content to keep possession rather than go at their opponents. It meant few openings were created though one encouraging feature was seeing Korrakot trying to go past defenders.

Buriram opened the scoring in the 31st minute when Korrakot’s free-kick from the right was met by Edgar who sent a well-placed downward header into the corner of the net. It was a well-taken goal as the Brazilian had to adjust his body position to beat the keeper. 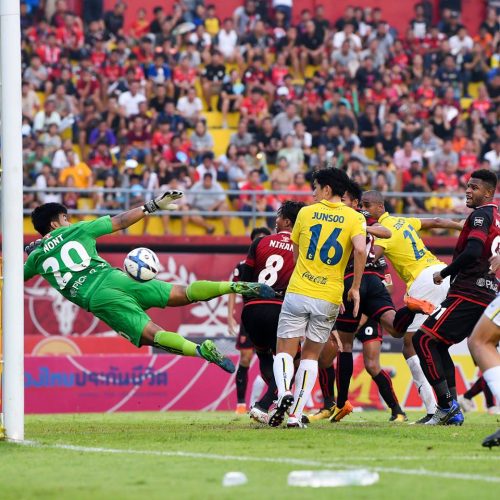 It got better for Buriram four minutes later when Korrakot sent over a right-wing corner which Edgar met at the near-post to send another accurate header into the far-corner.

Buriram were now firmly in the driving seat and stifled any attempt at a comeback by simply keeping the ball. 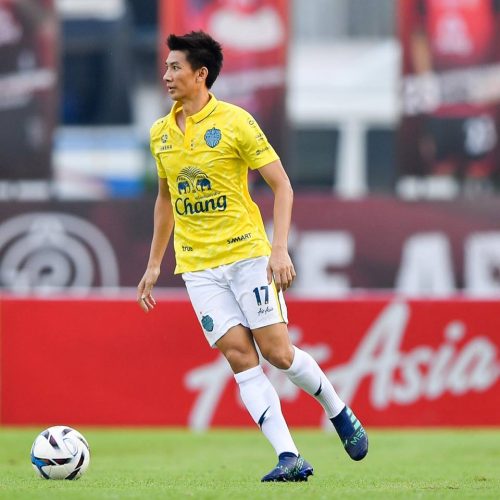 To say the second-half was a different story would be the understatement of the year. Police Tero went for Buriram from the off, increasing the pace of their attacks and causing the defence plenty of problems. It was no great surprise when they pulled one back in the 58th minute though questions must be asked about the dreadful marking.

A low cross from the right was not dealt with and the ball finally reached Aung Thu at the far post with not a defender in sight and he hammered it past a helpless Siwarak.

Buriram then brought on Jakkaphan to try and restore order in midfield and Buriram were close to regaining their two-goal advantage in the 67th minute when Diogo cleverly created space for himself in the box before firing in a goal-bound shot which a desperate defender just got a touch on to deflect it wide.

The resulting corner was cleared but Tunez was felled from behind by a vicious kick from Buangam and the referee issued a straight red . He should then have awarded a penalty as the law clearly states that as long as the ball is in play, a penalty has to be awarded regardless of where the ball is.

Another example of the standard of refereeing here.

Buriram made their third substitution in the 79th minute, Praweenwat coming on for Ekkaluck. Jakkaphan picked up a yellow card for a stupid challenge in the 82nd minute as the home side continued to press despite being a man down.

However, in a rare Buriram foray upfield in the 87th minute, Diogo latched onto a right-wing cross to turn and send in a shot which was deflected wide. The same thing happened in stoppage time as Buriram held on.

This display was unrecognisable from the previous two games and if Buriram had one eye on the Champions League on Tuesday then they can consider themselves very lucky to get away with it.

The match against Jeonbuk kicks off at 5pm (Indochina time) and let’s hope that late goal last week does not prove costly. Realistically, Buriram will probably have to score at least once to progress. Good luck boys !