Buriram had to settle for a point in an entertaining 2-2 draw at Thai Port after leading 2-0. However, a dreadful decision by the referee and slack defending allowed the home side back into the game. The champions still had enough chances to win easily but a combination of poor finishing and bad luck saw them have to settle for a point.

No damage was done as Bangkok United were held to a goalless draw at Nakhon Ratchasima to leave Buriram still nine points clear at the top with eight games to go. 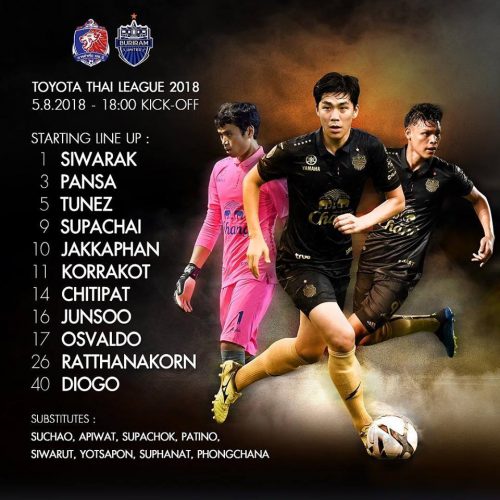 The first real action came in the 7th minute and to say it was controversial would be an understatement. Port top scorer Boskovic clearly elbowed Tunez in the face and although the big defender made a bit of a meal of it, the expression on Boskovic’s face clearly showed that it was intentional. However, no action was taken .

The opening chance fell to Port in the 14th minute when hesitant defending allowed them a clear shot on goal but fortunately it was straight at Siwarak who saved comfortably. Then it was Buriram’s turn in the 24th minute when Korrakot’s left-wing cross was met by Diogo with a downward header which went wide.

However, a minute later Diogo showed his predatory instincts to put Buriram ahead. Ratthanakorn advanced towards the area down the right before powering a low shot against the post. Diogo was onto the rebound in a flash and sent a low shot from a tight angle into the far corner. A true striker’s finish.

Buriram went further ahead in the 31st minute when Jakkaphan sent a lovely through ball for Diogo to race onto and showing great strength and balance the Brazilian coolly slotted it past the helpless keeper. 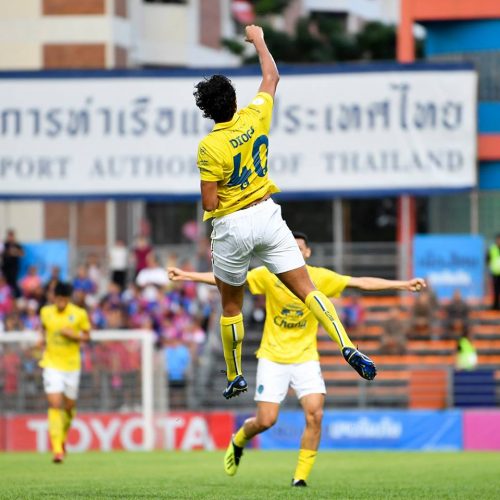 The home side got back into the game in the 41st minute when Boskovic ( who should not have been on the pitch) went down just outside the area. Tunez was rightly furious with the referee as there was clearly no contact. Up stepped Pakhorn to send a fantastic free-kick over the wall into the top corner. It really was a sensational strike but it should not have been allowed to happen.

Still, Buriram looked in control of the game as they went off at the interval.

Buriram brought on Suchao for Supachai and in the first minute of the half should have restored their two-goal advantage. Brilliant close control by Diogo in the left of the box allowed him to cross low only for Osvaldo to miss the ball from just a few yards out. However, the ball ran to the totally unmarked Junsoo who only had to hit the target but he somehow contrived to send the ball over the bar when it looked easier to score.

Chitipat picked up a yellow card in the 50th minute when he was forced to halt a potentially dangerous move with a tackle from behind.

A minute later the home side were level. Chitipat missed a tackle out on the Buriram right and when the ball was crossed into the box both Pansa and Korrakot allowed K.Sunghwan a completely free-header. It really was dreadful defending with both players guilty of ball-watching. Tunez was not slow to let them know what he thought about it. 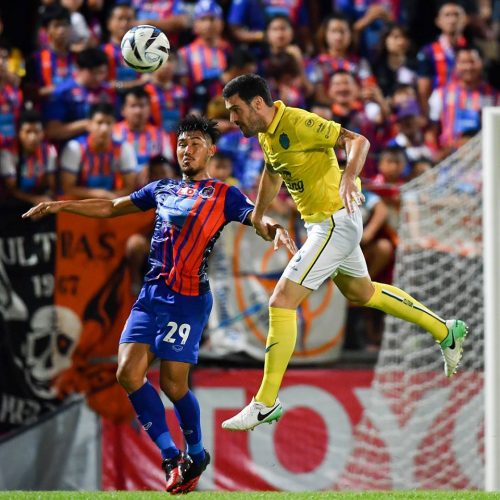 Tunez outstanding at the back.

Obviously, Port now had their tails up but to their credit, Buriram re-established control of the game and did not allow the home side another clear sight of goal. Ratthanakorn was shown a yellow card in the 67th minute and Supachok came on for the strangely subdued Junsoo in the 72nd minute. You have to have some sympathy for Junsoo as he hasn’t had the chance to settle into any one position. He has played everywhere apart from in goal !

Buriram created another good opening in the 74th minute but Osvaldo’s finish once again was not emphatic and the keeper saved comfortably. That was his last contribution as he was replaced by Patino. The Brazilian has not yet registered a league goal which is disappointing considering the number of chances he has had.

It was now all Buriram and they had another great chance in the 88th minute when the keeper punched a dangerous right-wing cross straight to Diogo but he sent his effort wide.

Still Buriram kept coming forward and they won a free-kick in the last minute of stoppage time. Diogo sent a low shot thudding against the post and the keeper saved superbly from Tunez’s follow-up.

Certainly, this was two points lost as Buriram created far more openings and both Port goals should have been avoided. Diogo was simply outstanding and it’s a pity he couldn’t convert the easiest chance of the three that he had. However, as stated earlier no damage was done and the title is well and truly in Buriram’s own hands.

Next up is the League Cup quarter-final against Ubon at the Chang Arena on Wednesday, August 8, 6pm.