A goal in either half by Diogo saw Buriram ease to another three points which brings retaining the title a step closer. This was always going to be one of the toughest hurdles to cross but Buriram were in control for much of the game, particularly in the second-half.

Once again, it was Diogo who did the damage and he was unlucky not to complete his hat-trick. Pansa was relegated to the bench with Junsoo coming in at left-back, a strange move and Patino was also on the bench with Supachok coming in. 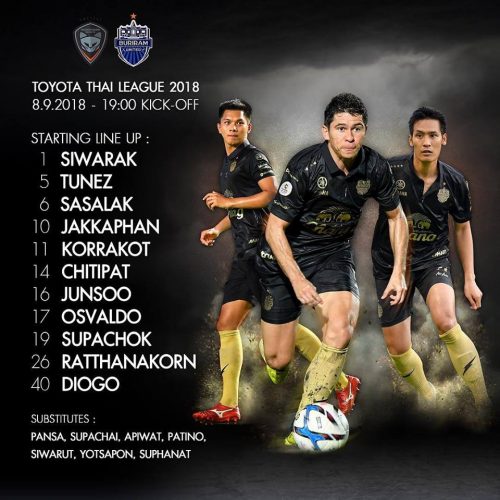 It was almost a dream start for Buriram in the 2nd minute when Diogo played Osvaldo into the left side of the area, only for his low shot to come back off the post.

Down at the other end, Buriram had a big let-off in the 5th minute when Sasalak’s clumsy challenge in the area went unpunished. It was a clear penalty but the referee was having none of it.

The game was fairly even and the home side had the ball in the net in the 23rd minute but it was correctly judged offside. Buriram were forcing plenty of corners but they were coming to nothing as the delivery was often disappointing.

The deadlock was broken in the 32nd minute when good work by Osvaldo down the right saw him send over an inviting low cross which Supachok left for Diogo to meet with a firm shot which the keeper could only help into the net. He probably should have kept it out, but that’s football.

More Buriram corners followed without any worthy goal attempts ensuing. However, Buriram should have increased their lead in stoppage time when Supachok picked up a half-clearance on the edge of the area but he dragged his shot wide.

So a satisfactory first-half for the champions.

The second-half continued in the same vein as the first with Buriram forcing more corners. Osvaldo had a great chance to open his league account in the 56th minute but sent a weak shot wide of the far-post.

However, he made amends in the 64th minute when he threaded a good through ball for Diogo to be onto in a flash and hammer a fierce shot past a helpless keeper. Diogo is so quick to react and it gives him that extra bit of time which all good strikers have. 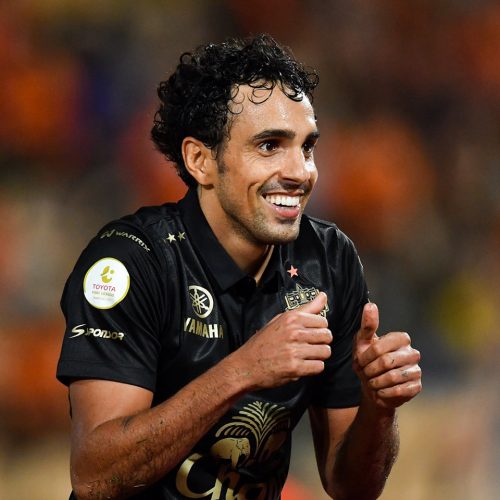 It could have been three a minute later when Osvaldo cut in from the left but his well-struck low shot was saved. Buriram then brought on Supachai for Jakkaphan in the 66th minute.

Osvaldo then set Diogo up again in the 71st minute but once more the keeper was equal to the task. That was Osvaldo’s last contribution as he was replaced by Patino.

Buriram were inches away from the third goal their dominance deserved in the 76th minute when Sasalak picked the ball up wide left before cutting inside to send a fierce shot crashing against the crossbar.

Supachok was just wide in the 81st minute though he really should have done better. Buriram made their final change in the 86th minute, bringing on Suphanat for Supachok.

The youngster made an immediate impact when he laid a lovely ball off for Korrakot who fired hopelessly over the bar. Suphanat then produced a beautiful through ball for Diogo to run onto before rounding the keeper but the ball bobbled just as the Brazilian was going to pull the trigger and it sailed over the bar.

That was more or less it and Buriram had been in total command for the whole of the second-half to come away with a deserved three points.

Next up relegation-threatened Sukhothai visit the Chang Arena on Wednesday September 12, 7pm.