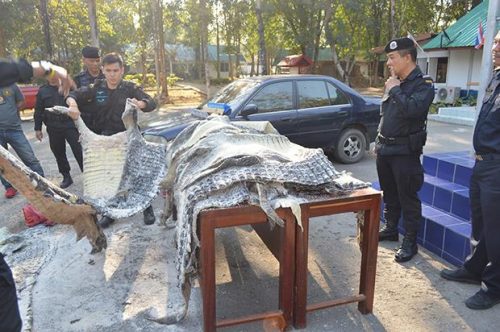 A Buriram man was arrested on Monday with several dozen crocodile hides that had been smuggled into the country from Cambodia, police said. Patcharapol Chinram, 27, of Buriram’s Muang district, was apprehended after the Honda City car he was driving failed to stop when signalled to at a police-military checkpoint at Ban Huay Khrai intersection in tambon Benchakachorn of Khlong Hat district.

Police gave chase and caught up with the vehicle at Ban Khlong Chik in tambon Sai Deo. A search revealed 51 crocodile skins, each 2-3 metres long, inside three fertiliser sacks in the back of his car.

Mr Patcharapol was charged with illegally importing wildlife products. Police said that during questioning Mr Patcharapol said he worked at a tanning factory in Samut Prakan’s Bang Phli district. He bought the crocodile hides for 500 baht each from Cambodians at Rong Kluea market in Aranyaprathet district.

He was taking them to the tanning factory in Samut Prakan when he was arrested.

Crocodiles are a protected species in both Cambodia and Thailand and illegal culling carries severe penalties. However, as in many illegal animal products, the potential financial rewards make the risks worth taking for smugglers.