Buriram’s march towards a sixth title continued as they deepened Sukhothai’s relegation worries with four outstanding strikes. However, don’t be fooled by the scoreline as the visitors played their part in a fast, open game which could easily have ended 8-4.

In the early stages Buriram’s defence was all over the place as the mercurial Baggio could have put Sukhothai 2-0 ahead. He was a constant threat and not once was a Buriram player able to dispossess him. How I’d love to see him in a Buriram shirt !

Pansa returned to the team with Chitipat dropping to the bench. Junsoo again played at left-back, with Pansa moving to the right. It looked as though it could have been a big mistake early on as Pansa was far from his dependable self. Also, Junsoo is not a full-back. He is probably Buriram’s most effective midfield player and should be in the thick of the action. 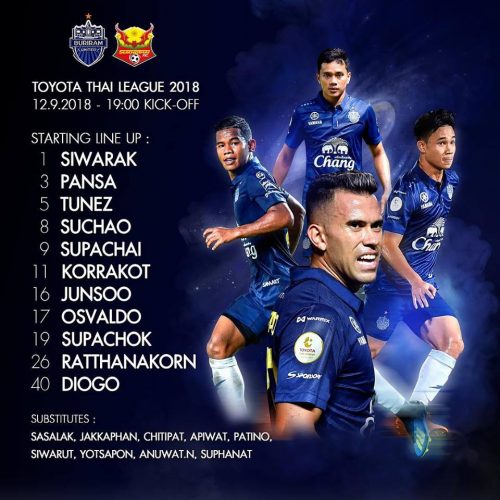 Buriram made a bright start and some neat interplay down the right in the 6th minute ended with a superb Diogo back-heel which put Supachok through on goal. A heavy second touch gave the keeper the chance to get down and block the low shot when it finally came in.

Four minutes later Sukhothai were awarded an extremely harsh penalty when the ball struck Junsoo high up on the arm. There was no movement of arm to ball and his arm was not extended. Bonilla stepped up to send Siwarak the wrong way from the spot.

It could have been much worse in the 18th minute when Baggio found himself clear on goal following more slack defending but Siwarak spread himself superbly to block the shot with his body.

A minute later, Buriram were level. Korrakot played a right-wing corner towards the near-post and the ball was knocked back towards the penalty spot for Osvaldo to hammer an unstoppable shot into the net. 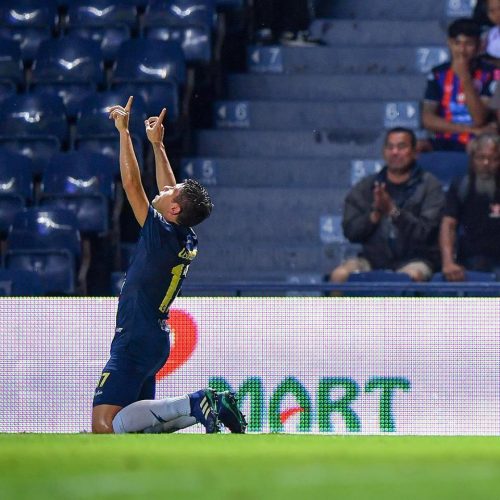 Buriram had the chance to take the lead in the 21st minute when Diogo put Supachai through on goal. The keeper bravely got down at his feet to make a good block but unfortunately was injured in the process and had to be substituted. Absolutely no blame attached to Supachai.

The second goal did arrive in the 30th minute when Korrakot picked the ball up wide right in the area before delivering a perfect cross for Supachai to calmly head in at the far-post.

The visitors had a great chance to level in the 35th when more shambolic defending allowed Baggio to pounce on the loose ball before pulling it back for a colleague to slice hopelessly wide.

The game moved into stoppage time and Supachai put Buriram two ahead with a brilliant individual goal. He showed great determination in winning the ball, then he went past a defender and thundered a great shot into the net from fully thirty yards. A sensational strike ! 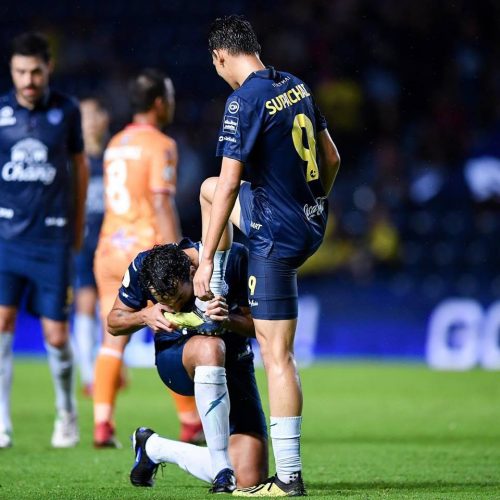 So a bit of breathing space for Buriram, though it seemed likely that further goals were on the cards in the second-half.

Buriram almost put the game to bed in the 51st minute when a great Suchao ball sent Osvaldo clear wide left. The Brazilian sent over a low cross which Diogo was just unable to reach.

A minute later it was Diogo who got clear down the left and he pulled the ball back for the unmarked Suchao but the less said about the skipper’s shot the better.

With games coming thick and fast, Buriram took off the excellent Supachai and sent on Jakkaphan in the 55th minute. Four minutes later Suchao played Osvaldo in but his low shot was turned round the post for a corner.

Buriram made a second substitution in the 71st minute, bringing on Patino for Osvaldo who probably had his most effective game in a Buriram shirt. With practically his first touch, Patino latched onto a loose ball in the left of the box before beating the keeper with a low shot which unfortunately came back off the far-post.

However, he was not to be denied four minutes later. Great work by Diogo down the right saw him pick out Jakkaphan with an absolutely exquisite cross. The keeper managed to turn the low shot away to his left, but Patino, showing great anticipation, slid the loose ball into the empty net.

Buriram brought on Apiwat for Pansa in the 84th minute and the big defender’s first contribution was to give the ball away carelessly , allowing Sukhothai a clear path to goal. Fotunately, he was able to retrieve the situation with a last-ditch tackle.

A minute from time, Korrakot swung over a left-wing corner which Tunez sent fizzing into the net with a downward header. The big defender’s celebrations were cut short by the referee who for reasons only known to himself, gave a free-kick.

There was still time for Junsoo to bring a good save from the keeper with a low shot before the referee blew for time.

An enjoyable game where both sides had their chances. Diogo was simply outstanding in his 100th league game. The only mystery was that he didn’t add to his tally of 97 league goals. A remarkable achievement at any level.

Supachai scored two good goals and Supachok was also instrumental in many of Buriram’s better moments. A good omen for the future.

Next up is a trip to bitter rivals Muang Thong on Sunday, September 16, 7pm. It is certain the Kirins will be eager to halt Buriram’s title charge.

This is followed only 48 hours later by the League Cup semi-final against Bangkok Glass at Police Tero’s ground , 7pm.