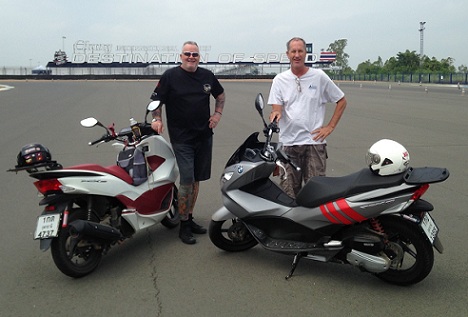 Newsflash from the Moto GP website, the official MotoGP calendar for 2018 was released and in addition to the Japanese, Australian and Malaysian GP races, Thailand has been added as a new destination to lead off this Asian tour on October 5-6-7 at the Chang International Racing circuit in Buriram.

As a motorcycle loving American expat living in UdonThani who returns to the USA each summer to cruise the Western USA on my beloved BMW 1200 and being a big fan of MotoGP racing who has attended many MotoGP races while living in the USA the obviously idea pops into my head “let’s go to the race”. 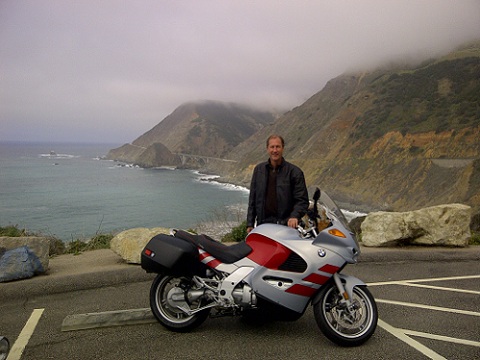 Scott with his beloved BMW 1200 in California on Highway 100, with the pacific ocean in the background

After discussion with some interested friends here, we come to the obviously brilliant idea that the place to start this journey is to get some tickets but this idea ends quickly as we find out that ticket sales haven’t been opened up yet. Then things get even more interesting. After reading a few blogs, articles and comments about the race and Buriram in general we realize that most of the comments come to the conclusion that the biggest problem in attending the race won’t be getting some tickets but finding a Hotel room within 50km of the track or Buriram. Anybody who has ever attended a 3 day race event knows the last thing you want to be doing, going to or returning from a race is to fight traffic for a few hours just to get back to your Hotel room before you fight traffic again to return to town and enjoy some nighttime entertainment. So I start the searching for Hotels using the usual travel booking websites and cannot find any Hotel closer than 50km to Buriram with availability at any price. So after some more brainstorming we come up with another obviously brilliant idea “road trip” to Buriram.

The plan was simple, myself another American friend John and a Norwegian friend Tim would get on our big bad awesome Honda PCX’s and cruise the rice fields between UdonThani and Buriram avoiding the main highways and have a nice motorcycle ride to Buriram. John and Tim both have multiple motorcycles but since I only have a PCX I think they chose their PCX’s so I wouldn’t be the only one on a scooter. Since none of us had ever been to Buriram we had a plan to check out the town “read: check out the nightlife and see if we could get a Hotel close to the fun” or if that failed, get a Hotel close to the track.

John stays at my house the night before, we don’t drink too much and were ready to roll at 7:30 the next morning. But Tim is a no show and after a few phone calls and text messages we hear from Tim and in typical Norwegian custom, Tim had a bit too much to drink last night and has a big hangover and won’t be making it. Mai-pen-rai, this is Thailand. John and I take off and cruise 313km in perfect weather on a nice ride through the rice fields arriving in Buriram about 2:00PM. We quickly hit a couple of big Hotels in town and confirm that yes they are all full for the dates of next year’s MotoGP race. Our serious search for any Hotel will have to wait until tomorrow. We get a room that night at the Thai Hotel, dead center for the nightlife in Buriram. Interestingly when we checked in we also asked them if they were booked for the MotoGP race next year and they said that they not booking any rooms yet for those dates and didn’t have a price set, which led to our speculation that they will wait to see how much more per room they could get at a later time. True to our plan John and I checked out the nightlife, Victoria Entertainment Complex and Bamboo Bar mostly. Details of this task are omitted for a later reportJ.

We decide to give up on trying to find a Hotel in town and decide to head to the Chang International Racing circuit about 10 min outside of town to see the track and what’s out there. We arrive at the track and stop at the entrance to take a few photos and check things out. While we are there in the typical friendly Thai custom a Thai man about 25-30 years old stops and asks us if we need some help. We begin a long photo taking and general talking with Chan (not his real name) who had lived in the USA for a few years and spoke good English. We explain why we were here and does he have any advice, etc. It turns out Chan works at the track and asks us if we would like a tour of the Grand Stands, so we follow him into the track parking area and just walk around talking, checking out the Grand Stands and taking pictures of the track. I ask if I can take a quick lap around the track on my PCX but both Chan and the security guards say no way. Chan then offers to help us with finding a Hotel close to the track. We stop at the 2 Hotels directly on the track grounds, the Box Hotel and the Amari, no surprise both are fully booked and very expensive. Then on the advice of Chan we set out to check out some of the Resorts down a small Soi next to the track. We stop at 2 Resorts and both are fully booked, then we make a stop at a 3rd resort and good luck, a nice Thai lady looks really confused when we ask about rooms available 1 year from now (she was obviously not a race fan!) and after some translating from Chan she says she has many rooms available for about 600 Baht per night. John and I ended up booking 4 Bungalows and 8 rooms for all 3 days and left about a 50% deposit. Mission accomplished, cased closed, let’s celebrate. John invited Chan to dinner with us that night to say thanks for helping us out and Chan and another race track employee Nat (not her real name) came with him and we now had 2 new friends that worked at the race track. After dinner John continued the nightlife scouting and went to a place closer to our Resort and the track called the “Lively Market”. Details from John were very positive for this area. I had a beer at the Bamboo Bar with Chan and Nat and John joined us later.

We went to lunch with Nat close to the race track, mostly because I’m still trying to figure a way to get a lap around the race circuit in my PCX and maybe it can be arraigned sometime. That night Nat invited us to the Market at the track for some Thai BBQ and beer, we both didn’t drink much as we had to leave early the next day but enjoyed the evening with a new friend.

Left the Hotel in Buriram about 7:30 AM and cruised back through the rice fields to UdonThani arriving about 2:00PM. Good weather and a nice ride through the Thai countryside. 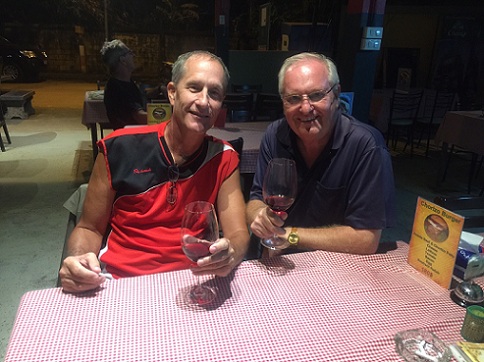 We will be keeping in touch with our new friends Chan and Nat and our next goal is to get some tickets!