Buriram eased into the FA Cup Semi-finals with a comfortable 3-1 victory at Thai Port. They were helped by two defensive howlers in the first-half which gave them a 3-0 interval lead. Although Port pulled a goal back, Buriram never really looked to be in danger of a home side comeback. 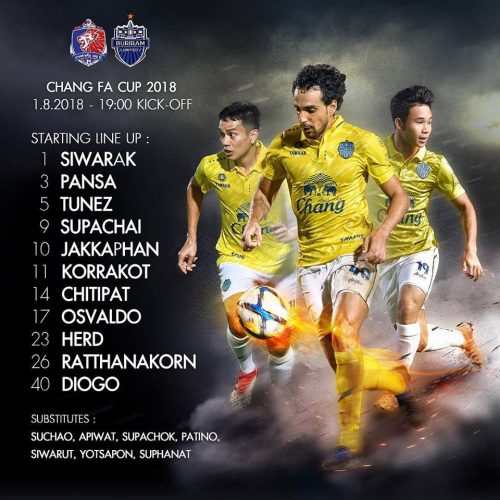 After a steady opening, Buriram took the lead in the 16th minute. Korrakot’s left-wing corner reached Pansa and the defender did well to twist his neck so as to guide his header right in the corner of the net. 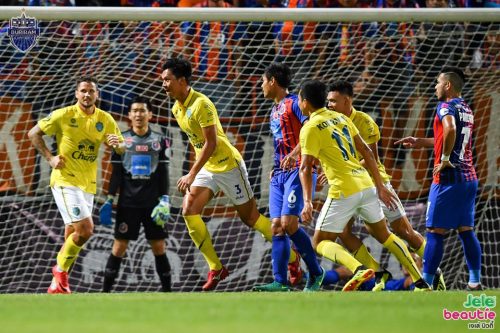 Pansa turns in delight after heading Buriram into the lead.

A minute later it was two. A bad defensive error allowed Osvaldo to run clear down the right before his cross went between a defender’s legs for Supachai to calmly stroke into the net. 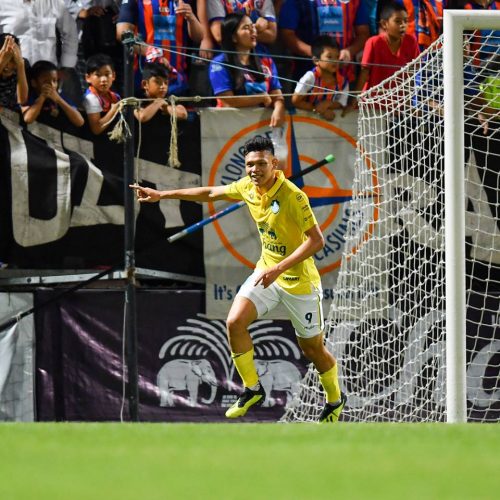 There followed a period of midfield sparring with neither side really threatening until the 39th minute when Buriram were gifted the vital third goal. Diogo latched onto a through ball but lost control and former Buriram star David Rochella inexplicably lobbed the ball over his own keeper. He could have easily thumped the ball out of play but for some reason gave his keeper no chance whatsoever.

That was more or less game over, barring a complete disaster.

Buriram had a good chance to put themselves out of sight in the 48th minute but Supachai’s header from a left-wing cross was easily saved. Supachok then replaced Herd in the 60th minute before the home team pulled a goal back in the 66th minute. Port worked the ball from the left to Pakorn in the right of the area and he sent a low shot across Siwarak into the far corner.

Port almost scored again a minute later but Siwarak made a great save from a low shot which looked a goal all the way. Buriram brought on Suchao for Supachai in the 68th minute to steady the ship but the home side were looking more dangerous.

Buriram had Siwarak to thank again in the 72nd when he got down well to touch a low shot onto the post. Next it was the Port keeper’s turn to shine when he produced a magnificent save to deny Korrakot in the 78th minute.

It was now Buriram who were calling the tune and Patino came on for Osvaldo in the 86th minute. Deep into stoppage time Ratthanakorn was through but he fired hopelessly over the bar.

All in all, Buriram’s first-half strikes meant a reasonably comfortable ride into the semi’s but they have it all to do again in the league on Sunday, kick-off 6pm.