Buriram managed to emerge with three points from a dreadful game at home to relegation-threatened Suphanburi. Both sides were guilty of giving away far too many unnecessary free-kicks, though the visitors like most before them, made Diogo a target.

There was simply no flow to the game as the referee’s whistle became monotonous and to be fair to him, he tried to play the advantage wherever possible. It must be incredibly frustrating for the coaching staff to see their Thai players giving away possession so often through pure thoughtless, indiscipline.

Buriram must have committed over twenty fouls in this game with only Osvaldo’s one indiscretion down to a foreigner. The players must accept that lesser teams are going to try and disrupt them and the way to exact your revenge is to punish them with goals not get involved in what went on tonight.

Buriram got off to a dream start with a goal in the 2nd minute. Osvaldo’s left-wing corner found Tunez at the near post and the big defender’s head did the rest. 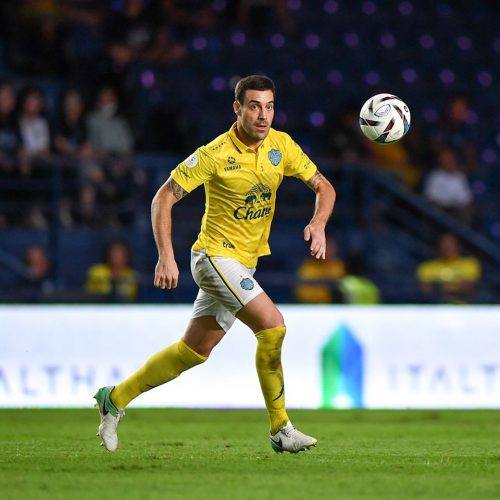 As already mentioned, the foul count began to start mounting up and the next meaningful action came in the 24th minute when Korrakot’s free-kick from the left found Junsoo at the far-post and he chested it down beautifully but instead of finding the far corner, he elected to cross and the chance was gone.

Osvaldo picked up a yellow card in the 31st minute when he took his own retribution after the referee failed to award a foul on Diogo. It took another seven minutes for Buriram to register their first shot on target but Diogo’s forty-yard free-kick was never going to be a problem for the keeper.

Diogo combined well with Osvaldo down the right in the 42nd minute but the latter’s cross was just too far in front of Supachai.

And that was the first-half.

Buriram brought on Supachok for Suchao in the hope of making more things happen up front.

Diogo won a free-kick in a good position in the 51st minute but it failed to breach the wall and when Buriram lost possession far too easily from the rebound, Suphanburi broke quickly down the right and after two passes Tanasith was firing the ball low across Siwarak and into the far corner of the net. Well-conceived and taken, but it should never have happened.

As the free-kicks continued to flow like drinks at a wedding, Buriram found themselves with a great chance to take the lead in the 57th minute. A Suphanburi attack was halted and the ball was quickly hit over the top for Diogo to superbly get on the end of before he was felled from behind in the box.

It was a clear penalty yet the protests went on for a full four minutes before Diogo was allowed to do the usual from the spot. There can be no excuse for this and the referee should have put a stop to it very quickly with a yellow card or two. 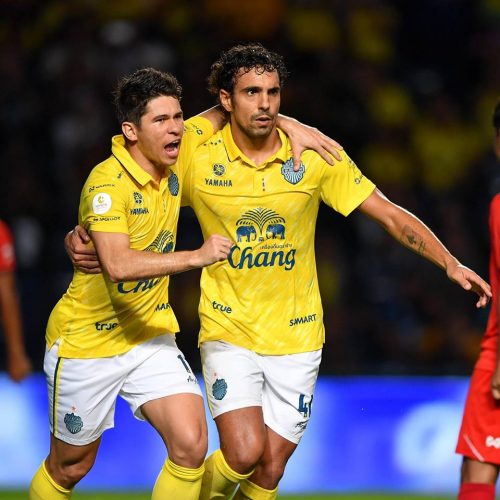 Diogo did the business again from the spot.

Buriram brought on Patino for Osvaldo in the 68th minute and almost immediately the attack began to show some fluency. Granted, Patino did snatch at a couple of half-chances but his link-up play was allowing others to get into dangerous positions.

The home side then produced the move of the match in the 88th minute when some lovely one-touch passing saw Patino involved twice before the ball reached him again . He did everything right but the keeper flung himself to his right and turned the ball round the post.

That was just about it as the minutes ticked by and the referee brought things to an end after four minutes of stoppage time.

It’s only fair to remember that Buriram are still involved in three competitions and it is unreasonable to expect them to play at a hundred miles an hour in every match. However, they should be making keepers work much harder and hopefully as Patino regains match fitness, this will be the case.

The next match is the FA Cup quarter-final at Thai Port on Wednesday August 1, 7pm before Buriram return to Thai Port in the league on Sunday,August 5, 6pm.