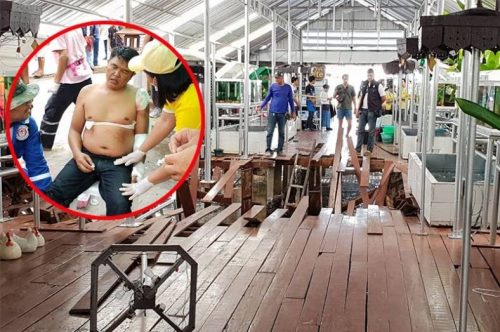 Buriram workers dumped in the sea.

In a further dent to Thailand’s image as a safe tourist destination comes news from Sattahip today of the collapse of a seaside restaurant floor.

Some 70 diners – men and women visiting Bang Saray from a Buriram sugar factory – were dumped in the sea.

Fortunately the tide was out as a huge hole appeared in the floor of the restaurant.

Everybody was brought to the safety of the shore but 29 were reported injured and taken to hospital.

Police, local officials and rescue teams were quickly on the scene to help the Thai tourists.

The collapsed section is part of a mid-section of a structure that stretches 200 metres out to sea.

Police have temporarily shut down the restaurant as an investigation begins.