The UB 150cc pack coming around the hairpin for the first time.

The preceding got underway today on a damp and humid Saturday morning after heavy storms overnight.  The UB150 riders out on the track first for a short warmup before their super pole shoot out.  Rider number 123 McKinley Kyle Paz from the Phillipines, riding for UMA Racing Yamaha Phillipine Team, topping the times in this short session.  The super pole though was taken by rider #13 Md Akid Aziz who showed well in the practice sessions yesterday. And it was the same rider Md Akid Aziz that took the first race win.  It was a hard fought race though with a pack of around 15 riders staying close with the front runners taking turns to lead.  Tomorrow’s second race at 13:10 on Sunday has Md Akid Aziz on pole position again.  The grid positions are taken from each riders fastest lap during race 1.  It will be a well fought and interesting race again tomorrow.

In the AP250cc class it was business as usual for Muklada Sarapuech in the qualifying session topping the times and taking the first pole position for the season.  Irfan Ardiansyah, rider #16,  improved his timings from yesterday to take second spot followed by Tatchakorn Buasri placing third fastest to make it a Honda front row.  The race was no different, Muklada led from pole to flag while her team mate Tatchkorn Buasri battled for 2nd place with Irfan Ardiansyah who took 3rd place.  Muklada now leads the championship going into race 2 tomorrow. 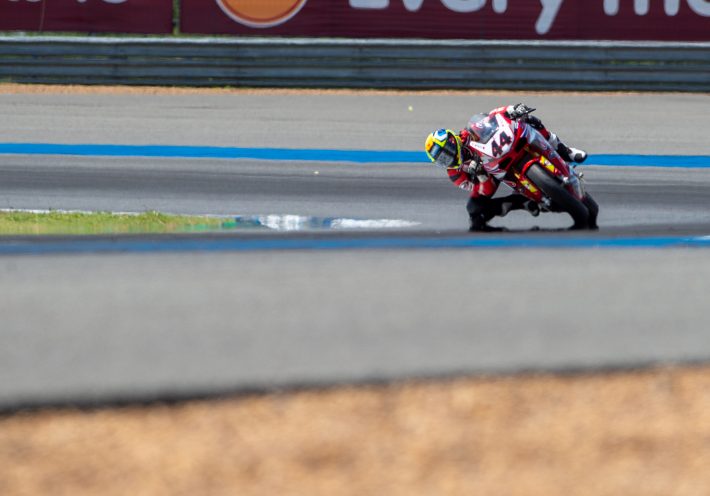 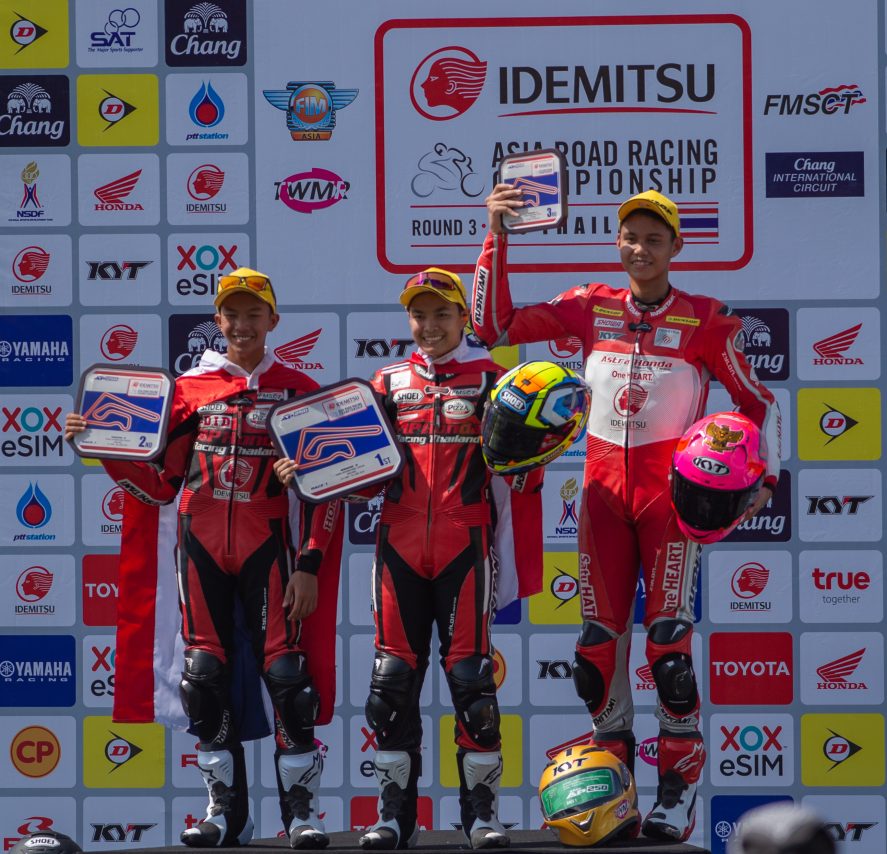 The top three AP250cc riders on the podium with the spoils

Of the three sessions in the SS600 class Kasma Daniel Kasmayudin topped two of the sessions but Peerapong Boonlert took the fastest lap time in the second session.  His domination of this class also saw him take pole position with a time of 1:39.294, it was only the top 4 that were below 1:40.  And so onto the race which was won by none other than Peerapong Boonlert, however he did not have it all his own way this time.  With 9 laps remaining rider #23 Md Ramadan Rosli took the lead with a leading pack of 4 riders. 7 laps to go and Peerapong is in the lead again.  2 to go and he has shown his strength again and has a lead which he held until the flag. 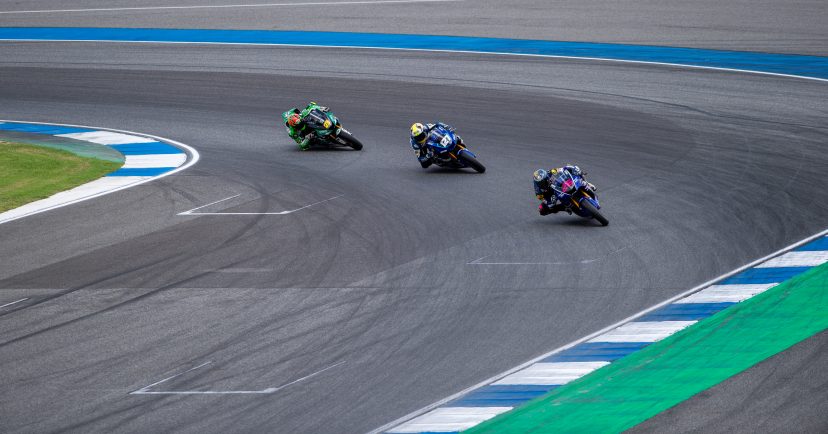 On to the ASB1000 and rider Md Zaqhwan Zaidi was untouchable in the first two sessions, racing for the Honda Asia Dream Racing with Showa team his dream ended in the final session and only completed 1 lap.  The fastest time was recorded in the final session by Azlan Shah Kamaruzaman on his BMW.  Qualifying also saw the ONEXOX TKKR SAG Team rider Azlan Shah Kamaruzaman on his BMW take the pole position.  Lining up on the grid though there was some tense moments as his number 25 bike had some mechanical problems that the team was trying to remedy.  Remedy they did and Azlan went on to finish the race in first position 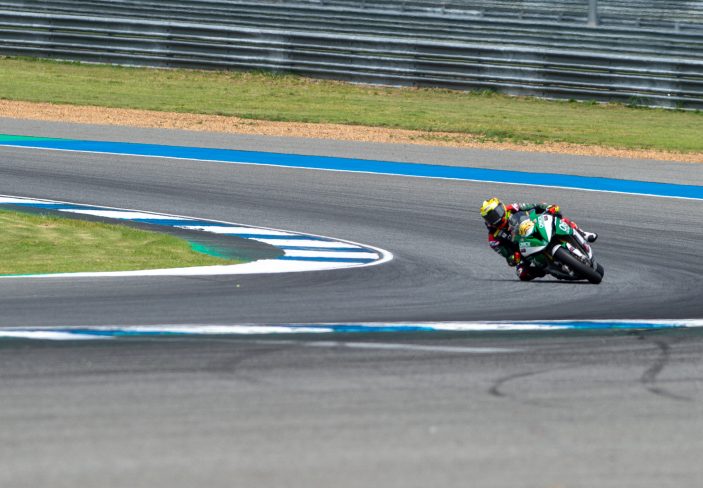 The Honda Thailand Challenge Cup racing is always exciting and well fought out.  Today’s first race was no exception.  First and second practice sessions were topped by rider #3 Bunyachai Prayoonyat but he had to settle for 4th place during qualifying.  The race started with Azryan Dheyo Wahyumaniadi (16) on pole, Cao Vietnam Nam (18) in second and Watcharin Tubtim-on (4) in 3rd place.  As it happens the 15 lap race ended with the same four riders in the same position.  Although it turned out to be a 4 horse race these riders pulled out a considerable lead and changed lead several times before the end of the race. 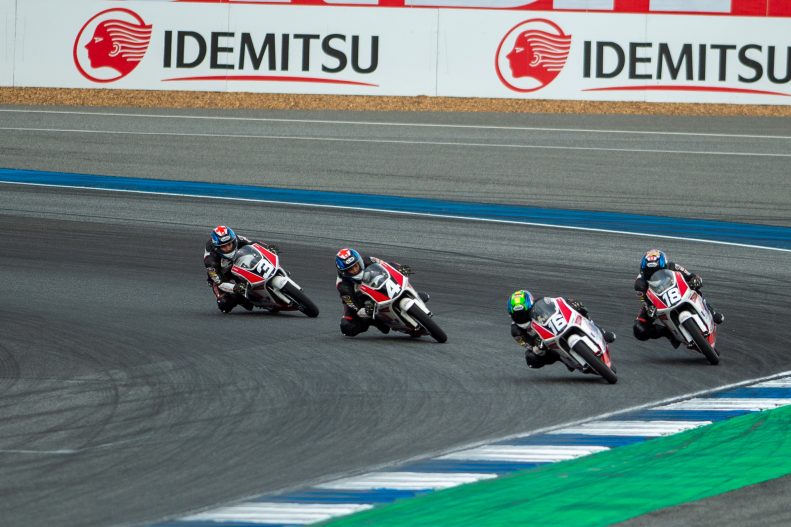 The 4 riders all battling race for the lead.