Buriram Take The Honours In Thriller At Chonburi 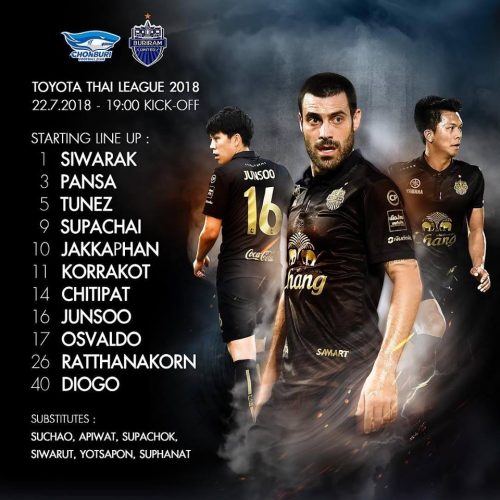 Buriram took a major step to retaining their title with a 2-0 victory at Chonburi . It was a breathtaking end-to-end encounter played at a furious pace. Both sides went for all-out attack and it’s remarkable that only two goals were scored. There were misses, great saves, hitting the woodwork, the game had everything in a great advert for Thai football.

The home side were on a run of good form and it was always going to  be difficult for Buriram but they held their shape well and deserved their victory. Diogo was the real difference between the two sides and he never stopped running. He could easily have come away with a hat-trick as Buriram regained their nine point lead at the top.

Diogo almost gave Buriram an early lead when he sent a free-kick from just to the right of the D inches too high. Siwarak then made a good save with his legs in the 13th minute before Buriram opened the scoring a minute later. And what a goal it was.

Osvaldo got free down the right before sliding an inch-perfect pass for Diogo to race onto and bury a first-time shot beyond the onrushing keeper. Great stuff. 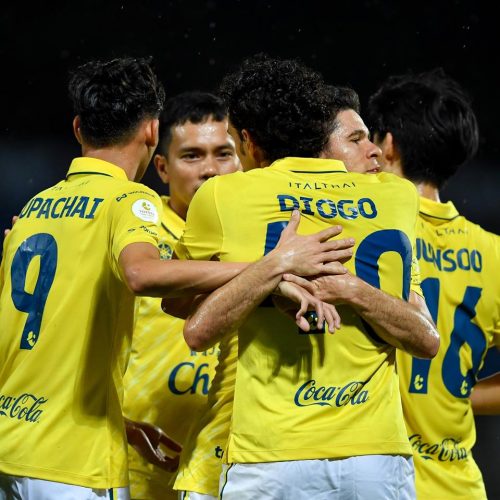 Korrakot picked up a needless yellow card in the 18th minute as the game game ebbed and flowed for a while with neither side having a clear sight of goal. However, Buriram increased their lead in the 38th minute following another lightning break out of defence.

Osvaldo again got clear down the right and sent over a low cross which Jakkaphan allowed to run to Diogo. The Brazilian was calmness personified as he controlled the ball before rolling it to his right for Jakkaphan to sidefoot into an empty net. Another excellent goal.

A minute later it was almost three when Junsoo collected a left-wing cross but his goal-bound shot was deflected inches wide for a corner. Chonburi responded with a quick break down their right and when the cross came in, Siwarak was forced into a great save.

That was it for an entertaining first-half

Chonburi created a good chance in the 46th minute but Siwarak got down to make a smart save. Both teams were hell-bent on attack and Korrakot’s right-wing corner in the 57th minute was met by Pansa with a firm, downward header only for the keeper to fling himself to his left to pull off a remarkable save.

Buriram had another chance to put the game to bed in the 62nd minute but the unmarked Ratthanakorn made a complete hash of a left-wing cross when he really should have scored.

Six minutes later we saw both teams hit the woodwork in the space of a minute. First, Siwarak could only watch as a left-wing cross was headed against the crossbar. Two follow-up shots were brilliantly blocked by flying defenders before the ball was cleared to Osvaldo down the right.

He sent a through-ball for Diogo to brilliantly run onto before placing a low, left-foot shot past the keeper . However, the ball struck the inside of the post and somehow came back out instead of finding the net. 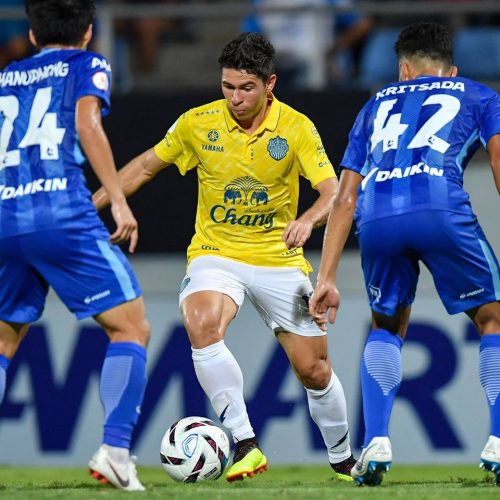 Another great chance came and went in the 76th minute. Supachok had come on for the again disappointing Supachai and Diogo found him with a lovely pass. He had only the keeper to beat but curled his shot wide.

Next it was Chonburi’s turn to come close in the 79th minute. Siwarak pulled off a great save low to his right following a right-wing cross .  Four minutes later brilliant individual skills by Diogo saw him race clear but his attempt to chip the keeper was too high. That would have been goal-of-the season !

Chonburi by now had realized that it wasn’t going to be their night and the final chance fell to Osvaldo deep into stoppage time but his low shot was well-saved.

So, another tricky game safely negotiated and with only ten games left Buriram are in a strong position. It was an excellent game of football and both sides deserve credit for their positive attitude. The only downside was the performance of Supachai. He does a lot of running but consistently fails to hurt teams, apart from when he gives away free-kicks.