Buriram came from behind to beat local rivals Nakhon Ratchasima (Korat) 2-1 and maintain their five point lead at the top of the table. However, it was far from a championship performance as they badly missed the threat of the suspended Diogo.

Edgar had a game to forget and he was probably relieved when he was put out of his misery with the introduction of Supachai in the second-half.

The game again showed a lack of directness by the home side. Buriram can play the ball around, sideways and backwards, but invariably when they create half an opening, they check and play the ball back instead of going for the byline. You have to take defenders on and not give teams so much time to get men behind the ball. Anon deserves more opportunities as he has a positive attitude and tries to make things happen. 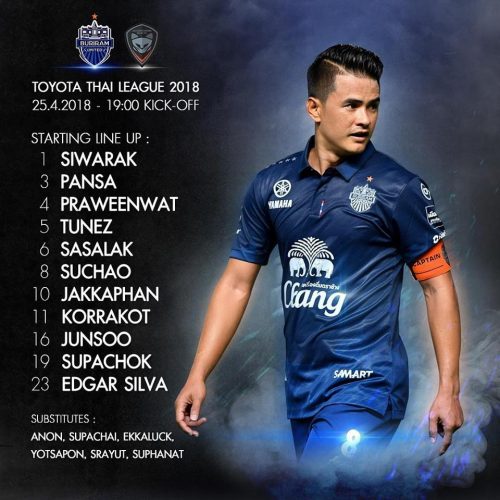 With Diogo suspended, Buriram opted to pack the midfield and leave Edgar alone up front.

For the second home game in a row, Buriram found themselves a goal down early on. Following an 8th minute right-wing corner , the ball was half-cleared to the edge of the area. A completely mishit first-time shot went straight to Akekanat whose low shot on the turn crept in at the far-post.

However, within 60 seconds the home side were level. Pansa sent a long ball forward down the right which Junsoo collected and despite being fouled , he managed to get in a shot which hit a defender and looped over the goalkeeper and into the net. Fortunate, but Junsoo deserved a bit of luck for his sheer tenacity.

Buriram went on the offensive and in the 21st minute, Supachok latched onto the ball out on the left before cutting inside and unleashing a fierce shot which the keeper brilliantly turned over the bar. Korrakot took the resulting right-wing corner and for once his delivery was perfect and Tunez headed home from close range, getting a goalkeeper’s fist on his nose for his trouble. 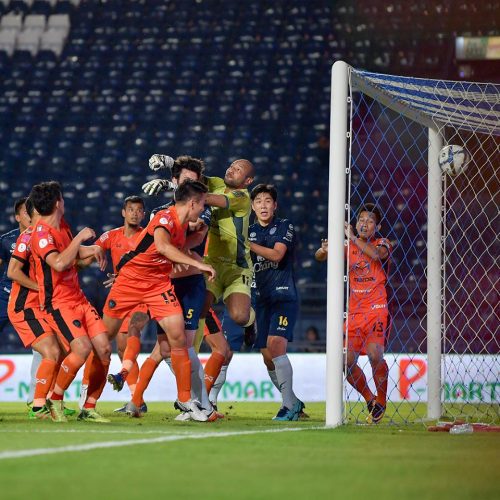 Tunez heads in what turned out to be the winning goal.

Although Buriram continued to have plenty of possession , they created very little in the way of clear-cut chances, relying on set-pieces to threaten the Korat goal.The big problem with this is the standard of delivery was generally very poor. Something which must be sorted out.

Two minutes before the interval, Buriram worked the ball down the right and Edgar found himself with time and space in the area. To say the Brazilian’s shot left a lot to be desired would be very kind indeed and many spectators simply burst into fits of uncontrollable laughter.

There was still time for Jakkaphan to create a shooting opportunity for himself but his attempt lacked real power and the keeper made a comfortable save, low to his right.

Buriram brought on Anon for Praweenwat for the second-half, whether the yellow card he picked up just before the interval influenced the decision is unclear. But it was a bad tackle.

The half continued much as the first one had with Buriram wasting free-kicks and corners. Just on the hour mark, Supachok showed great control in the area to get in a shot which was just wide of the far post. The youngster was lively throughout but appears to be lacking in confidence at the crucial time. He needs a couple of goals to settle himself down. 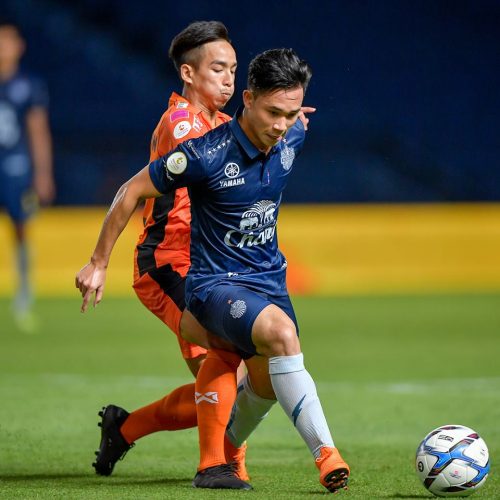 A minute later great work by Anon down the right saw him pick out the unmarked Jakkaphan but the chance was inexplicably badly wasted. Another opportunity arrived in the 69th minute when Edgar cleverly beat a defender to give himself a clear shooting chance but he leaned back and sent the ball high over the bar.

That was enough for the management and they sent on Supachai, much to the relief of the impatient spectators. Shortly after, Korat should have evened things up when a right-wing corner was flicked on twice to leave a simple chance from four yards out but much to Buriram’s relief the ball sailed over the bar.

They came close again in the 75th minute when a swift counter-attack saw a goalbound effort deflected over the bar by the ever-alert Tunez.

Buriram settled down again and forced more corners which came to nothing, apart from use up valuable time. So, the right result and just about deserved but it was far from convincing. Hopefully, Buriram can get to the break with no more slip ups and then Patino can add some much-needed firepower to the attack.

A special mention must be made of the away supporters who got behind their team throughout the game and sportingly chanted Buriram’s name at the final whistle. This is how it should be.

Next game is at Sukhothai on Sunday, April 29, 7pm. Not easy, by any means.